Mukul Roy Back in TMC Along With Son Subranshu Roy, Quits BJP

In a blow to the saffron brigade, senior BJP leader Mukul Roy along with son Subranshu rejoined the TMC on Friday, with Bengal Chief Minister Mamata Banerjee welcoming him back to the fold. 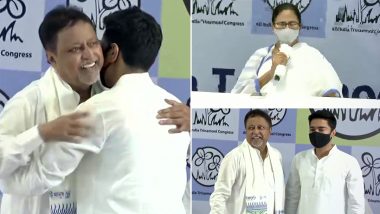 Kolkata, June 11: In a blow to the saffron brigade, senior BJP leader Mukul Roy along with son Subranshu rejoined the TMC on Friday, with Bengal Chief Minister Mamata Banerjee and other leaders of the state's ruling party welcoming him back to the fold. Roy, who held the position of the national vice president in the saffron party, said he was "happy to see all known faces again". Absence of Mukul Roy, Shamik Bhattacharya, Rajib Banerjee at Bengal BJP Meet Sparks Buzz.

Addressing a press meet, Banerjee said Roy was threatened in the BJP, and that, in turn, affected his health. "Mukul's return proves that the BJP does not let anyone in peace and puts undue pressure on everyone," the chief minister said. Both Banerjee and Roy claimed that there never had any differences.

Asked if her party would be taking back other turncoats, too, Banerjee clarified that the ones who left the TMC to join the BJP just ahead of the April-May assembly elections will not be taken back. Abhishek Banerjee, Mamata Banerjee's Nephew, Appointed National General Secretary of TMC.

Roy, once the second-in-command of the TMC, was removed from the post of the party's national general secretary in February, 2015. He had joined the BJP in November, 2017. Speculation had been rife about Roy's possible homecoming after Banerjee's nephew and TMC MP Abhishek recently visited his wife at a city hospital.