A Muslim family here offered their house in this month of Ramzan to organise the marriage function of a Hindu girl, who had lost her father in the first Covid wave. 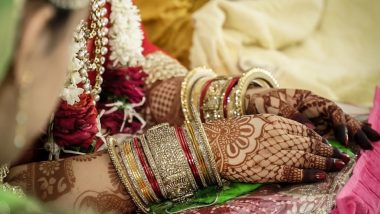 Azamgarh, April 24: A Muslim family here offered their house in this month of Ramzan to organise the marriage function of a Hindu girl, who had lost her father in the first Covid wave.

The family welcomed the marriage procession at their home and participated in the celebrations along with relatives of the bride, Pooja The girl's family had fixed her marriage for April 22 and reached out to their Muslim neighbours for help at the last moment.

Rajesh Chaurasia who lives in small house in Alwal locality of the district said, "We were not able to book any marriage hall for the marriage of my niece Pooja due to lack of funds and there was no space at our home to hold such a function." "When I informed our neighbour Parvez about it, he offered to hold the marriage in the courtyard of his house, without any hesitation," he added.

Relieved of this worry, Rajesh and his family focused on making other arrangements while Parvez and his family looked after the task of setting up the mandap.

The family vacated its courtyard where the marriage mandap was placed, decorated the place and seating arrangements were made for guests.

On the day of the wedding, Parvez along with his wife and other family members welcomed the marriage party. While male members of the family stood side by side in taking care of the guests, the women of Parvez's house sang wedding songs along with other women.

The family also hosted the traditional meal and offered gifts to the guests after the wedding. "Parvez gifted a gold chain to the groom before the marriage procession returned. They treated the guests as if Pooja is their own daughter," said Chaurasia. Parevez's wife Nadira said Pooja and her mother often use to visit their house and are treated as family members. Hindu Sindh Foundation Presents Comprehensive Programme For Saving Hindu Girls in Pakistan.

"Pooja is like my daughter. So, when we came to know about her wedding, we tried to do whatever little we could, as family members. It's also the holy month of Ramzan and what can be better than organising the marriage of a daughter," said Nadira.

Talking about their different religions, Nadira said, "We are of different faiths and have different gods but as humans it's our duty to ensure happiness of our daughters, that comes before everything. We only did that."