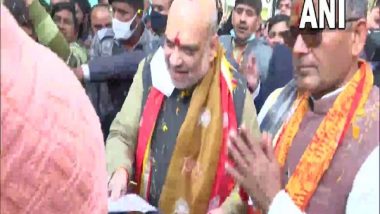 Shah also addressed an 'Effective Voter Communication' programme in Mathura earlier today and drew a comparison of BJP with Bahujan Samaj Party (BSP) and Samajwadi Party (SP), and said that unlike them, BJP does not work for one caste or dynasty, "it works for entire society".

"BJP is not the party for one caste but for the entire society," the Union Home Minister said.

He also thanked the people of the Braj region for always choosing lotus (BJP), "be it the elections of 2014 or 2017."

Prior to these programmes, the Home Minister also offered prayers at Banke Bihari Temple in Vrindavan city of Uttar Pradesh's Mathura today.

Shah's public engagements are significant as elections on 403 Assembly seats in Uttar Pradesh will be conducted in seven phases starting from February 10.

The counting of votes will take place on March 10.