Over 1.6 lakh healthcare and sanitary workers at the frontline of India's COVID-19 battle got their first jabs on Saturday as Prime Minister Narendra Modi rolled out the world's largest vaccination drive against the pandemic, showing the light at the end of a 10-month tunnel that upended millions of lives. 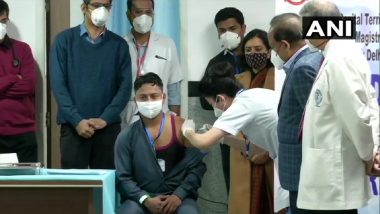 New Delhi, January 16: Over 1.6 lakh healthcare and sanitary workers at the frontline of India's COVID-19 battle got their first jabs on Saturday as Prime Minister Narendra Modi rolled out the world's largest vaccination drive against the pandemic, showing the light at the end of a 10-month tunnel that upended millions of lives. COVID-19 Vaccination Drive: 'Made in India' Vaccines Proof of 'Aatmanirbhar Bharat', Says Home Minister Amit Shah.

More than one crore cases and 1.5 lakh fatalities later, India took its first steps out of the pandemic with shots of the Covishield and Covaxin vaccines being administered at medical centres across the country to a collective sigh of relief that this could finally be the beginning of the end of the COVID-19 trauma.

"I had good sleep last night, came here (hospital) in the morning and talked to the other staff who were to get the shot," the 34-year-old who got a shot of the indigenously developed Covaxin told PTI.

“Many of them were scared. So I went to my seniors and said I should be given the vaccine first. I wanted to prove to my colleagues that there is no need to be scared," he added as speculation swirled in some quarters about safety levels.

Addressing the nation ahead of the launch, the prime minister reminded people that two doses of the vaccine are very important and asked them to continue with masks and social distancing even after receiving the jabs.

Reassuring people that emergency use authorisation was given to the two 'made in India' vaccines only after scientists were convinced of their safety and effectiveness, he said the vaccines will ensure a decisive victory for the country over the coronavirus pandemic, he said.

Striking an emotional chord, Modi spoke of the disruption the pandemic had caused to people's lives, isolating victims of the coronavirus and denying the dead traditional last rites.

In a choked voice, the prime minister also referred to sacrifices made by healthcare and frontline workers, hundreds of whom lost their lives to the viral infection.

"Our vaccination programme is driven by humanitarian concerns, those exposed to maximum risk will get priority," the prime minister said.

He said it normally takes years to make a vaccine but in India two vaccines were ready in a short span of time and work on other vaccines was also progressing at a fast pace.

Paving the way for the massive pan-India inoculation drive, the Drug Controller General of India (DCGI) had earlier this month approved Covishield, from the Oxford/AstraZeneca stable and manufactured by the Serum Institute of India, and the indigenously developed Covaxin from Bharat Biotech for restricted emergency use.

Over three lakh healthcare workers are targeted for inoculation on day one at 3,006 sites across all states and union territories.

From the heights of Ladakh to coastal Kerala, across the sprawl that is India, there was an almost festive air at many hospitals and medical centres decorated with flowers, balloons and buntings. Prayers, and sweets too, were offered in several places. One video showed a vaccine box being garlanded as a nurse performed an ‘arti'.

Union Health Minister Harsh Vardhan, who was at AIIMS when the vaccinations began to spontaneous applause, said the two vaccines are a ‘sanjivani', life infusing, in the fight against the pandemic.

"We have won the battle against polio and now we have reached the decisive phase of winning the war against Covid. I want to congratulate all frontline workers on this day," Vardhan told reporters shortly after the first vaccine shots were administered.

Bipasha Seth, a doctor at a private hospital in the West Bengal capital Kolkata, was one of them.

"It's a great day for humankind. I feel elated to get the first dose," Seth said.

“We were in a state of depression for the last one year. From today, we will again relive our lives," he said.

In Gujarat, the drive began at 161 centres in the state where the vaccine jabs were administered to health workers almost simultaneously.

"I am honoured that my name has been selected for first dose of vaccine at this centre in Rajkot. I didn't have any apprehensions…," said Ashok bhai, who drives a medical van and was among the first recipients in the state.

"Nobody should have fear of side effects of this vaccine as it has passed through many trials and experts have certified it," added former Medical Council of India (MCI) president Ketan Desai who got a jab at the civil hospital in Ahmedabad in the presence of Chief Minister Vijay Rupani.

In the Maharashtra capital Mumbai, JJ Hospital Dean Dr Ranjit Mankeshwar was among the first in the state to get the shot.

The inoculation drive is taking place at 285 centres in Maharashtra.

Ranganath Bhojje, a worker at the Goa Medical College and Hospital (GMCH), kicked off the vaccination drive in the coastal state and said he was feeling “rather lucky”.

In Madhya Pradesh, where healthcare workers were welcomed with flowers at some centres and doctors performed a ‘puja' at a temple in Gwalior, a sanitation worker was among the first beneficiaries.

Tulsa Tandi, a 51-year-old sanitation worker was first in the queue in Chhattisgarh.

"Tulsa Tandi, a Swacchtakarmi (sanitation worker) at the Dr B R Ambedkar Memorial Hospital Raipur since 2008, was the first person to get vaccinated in the state," state director for the National Health Mission Priyanka Shukla told PTI.

Tamil Nadu rolled out the COVID-19 vaccination drive at 166 sites across the state with a government doctor the first to be administered the shot.

And in Telangana, a woman sanitation worker received the first dose of COVID-19 vaccine at a Hyderabad hospital to cheers and claps. Union Minister of State for Home G Kishan Reddy and Telangana Health Minister Eatala Rajender formally launched the vaccination programme at the state-run Gandhi Hospital.

The drive to combat COVID-19 began in Kerala at 133 designated centres with prominent government doctors among the first batch of frontline workers to be administered the vaccine.

The cost of vaccination of healthcare and frontline workers will be borne by the central government.