However, Cook teased about his comeback when he said 'never say never' on his possible return to England's Test outfit. 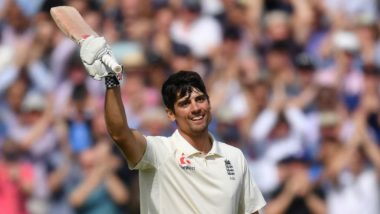 Melbourne, April 3: Former England captain Sir Alastair Cook cleared the air around his comeback in the Ashes this year declaring that he has played his last game for England.

The 34-year-old announced his retirement from international cricket in September last year. However, Cook teased about his comeback when he said 'never say never' on his possible return to England's Test outfit. Alastair Cook Picks No Indian Cricketer in His All-Time XI List: Watch Video.

"I've played my last game for England," Cricket.com.au quoted Cook as saying."There's always that one thing if there's an absolute emergency or something but I'm nowhere near that mindset. I've had 12 amazing years playing for England. It's time for the next generation of top-order players to try and make their mark," he added.

Cook called his cricket career an amazing journey. "I've had an amazing journey, I've loved it but towards the end I wasn't the player I was and things had to move on."The Ashes is scheduled to commence on August 1.