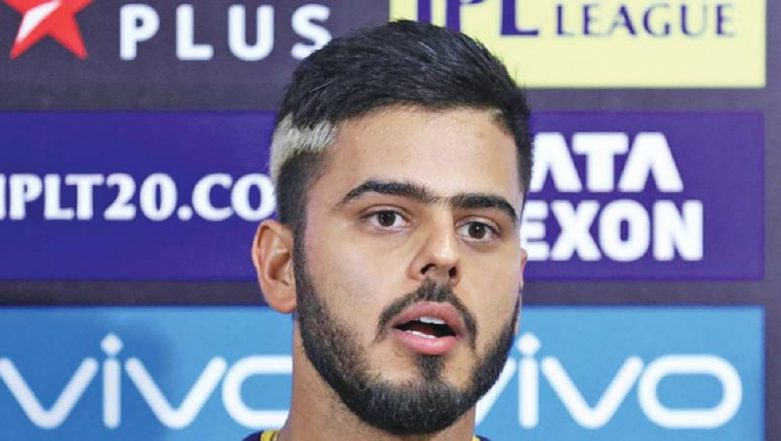 Mulapadu, February 25: Nitish Rana's unbeaten half-century guided Delhi to a seven-wicket win over Kerala in a Group 'A' match of the Syed Mushtaq Ali Trophy T20 cricket tournament here Monday. In other matches, Manipur trounced Nagaland by 10 wickets in a battle of newcomers while Jammu and Kashmir defeated Andhra Pradesh by five wickets.

In the Delhi-Kerala match, the latter won the toss and chose to bat but couldn't make the most of it, posting a modest 139 for 7 in 20 overs. Skipper Ishant Sharma struck the first blow for Delhi, having K B Arun Karthick caught and bowled for a duck and Kerala never really got going as the impressive Navdeep Saini got Rohan Prem (8), to a return catch. Karnataka Hammer West Bengal by Nine Wickets in Syed Mushtaq Ali T20 2019.

A fifth-wicket partnership of 60 runs between captain Sachin Baby (37) and Vinoop Sheela Manoharan (38) sparked a brief revival but Kerala lost its way towards the end of the innings, losing wickets and ended up at 139. All the Delhi bowlers got a wicket each with Saini (1 for 17 with 11 dot balls) being the most impressive of the lot.

Dhruv Shorey didn't last too long, falling eight runs later for 4, but Chand and Rana (52, 36 balls, 4X4, 2X6) were involved in a solid partnership. Chand and Rana took the match away from Kerala by rotating the strike and also coming up with big hits now and then. Chand, in particular, hit two massive sixes while Rana opened up after starting slowly.

Kerala struck a blow when Sandeep Warrier had Chand caught by Daryl S Ferrario. However, the left-handed Rana made sure that there were no hiccups as he guided the team home in Himmat Singh's company. It was Delhi's third win on the trot after losing the opening match to Jharkhand and is now on 12 points. Jharkhand heads Group 'A' with 12 points from three games.