Get latest articles and stories on Sports at LatestLY. Kalaivani demonstrated excellent skills against Uzbekistan's Farzona Fozilova in the women's 48kg semi-final. 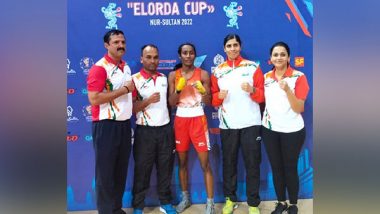 New Delhi [India], July 2 (ANI): Indian boxer Kalaivani Srinivasan entered the final with a dominating victory while Kuldeep Kumar progressed into the semi-finals of the Elorda Cup in Nur-Sultan, Kazakhstan on Saturday.

Kalaivani demonstrated excellent skills against Uzbekistan's Farzona Fozilova in the women's 48kg semi-final. The Chennai-born boxer's powerful blows and persistent attack didn't allow her opponent any opportunity to settle down as she comfortably won by unanimous decision in the end.

Kuldeep provided India a winning start on the fourth day of the competition but had to work hard for the victory. Kuldeep faced a stiff challenge from the local boy Kairat Yernur in the nail-biting men's 48kg quarter-final encounter. However, with a cautious approach and precise attack, he notched up a close 3-2 win.

Meanwhile, another boxer in the men's section, Yashpal lost to Kazakhstan's Aslanbek Shymbergenov by 0-5 margin in the 71kg quarter-final.

Among women, Babita Bisht (81kg), Jyoti (52kg) and Neema (63kg) signed off with bronze medals after defeats in the semi-finals. While Babita suffered a defeat against China's Zheng Lu by 'Referee Stopping the Contest' verdict, Jyoti and Neema conceded identical 0-5 losses against Uzbekistan's Feruza Kazakova and Kazakhstan's Anar Tursynbek respectively.

Savita's challenge also came to an end in the quarter-finals as she was handed a 0-5 loss by the Tokyo Olympics bronze medallist Japan's Namiki Tsukimi in the 50kg category.

Later tonight, 2021 Youth World champions Gitika (48kg) and Alfiya Pathan (+81kg), and Lalita (70kg) will fight in the semi-finals while Rajni (50kg) will play her quarter-final.

The inaugural edition of Elorda Cup has been witnessing the presence of top players from strong boxing countries such as India, Uzbekistan, hosts Kazakhstan, Cuba, China and Mongolia. The finals will be played on Monday. (ANI)