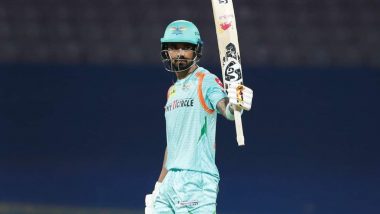 "Feels really good, a hard-fought effort in the bowling department, the planning was there and the execution was also there. It was a terrific knock, leading from the front and got us to a respectable total, so all credit goes to him (KL Rahul). I had no idea about how the wicket was going, when we batted KL was mentioning that the wicket was stopping a bit so we tried to bowl slower and ball that hard length for the new batters," said Krunal Pandya in a post-match presentation. Earlier in the first innings of the game, Kieron Pollard had dismissed Krunal and the left-hander just managed one run. However, Krunal ended up dismissing the MI all-rounder after scoring 19 runs. Royal Challengers Bangalore vs Rajasthan Royals Betting Odds: Free Bet Odds, Predictions and Favourites in RCB vs RR IPL 2022 Match 39

"Really happy for Chameera and for us it is important to get better as individuals and as a team. Mohsin is a bright prospect, he has pace and variations and for him, the first game like this will boost his confidence. I was so thankful that I got his (Pollard) wicket otherwise he would have eaten my brain throughout my life because he got me out and now that it's 1-1 at least he will speak less. Honesty is important in the team and these guys (coaching staff) are doing pretty well and ensuring everyone is getting better. For me process is important and we want to accept our mistakes and learn from it," he added.

In the match, LSG skipper KL Rahul led from the front, scoring an unbeaten 103 off 62 balls, his second century of the season, to help his team post 168 for six in their 20 overs. In reply, MI didn't have the best of starts with Ishan Kishan struggling to get runs. He was eventually dismissed for 8 off 20 balls. Dewald Brevis (3), and Suryakumar Yadav (7) too failed to make a significant contribution, leaving their team struggling at 58 for three in 9.4 overs. In the last over of the match, Mumbai Indians needed an impossible 39 runs to win, where Krunal Pandya dismissed Pollard for 19. One ball later Jaydev Unadkat was run out for 1 and Krunal took his third wicket of the match dismissing Daniel Sams for 3 as Mumbai were restricted to 132/8 in 20 overs falling 36 runs short of the target and succumbing to their eighth defeat of the season.