Liverpool striker Mohamed Salah will likely miss the club's next Premier League game after the Egyptian soccer association said that he had tested positive for the coronavirus for a second time. 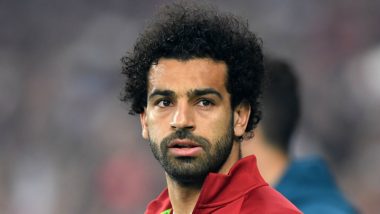 Cairo, Nov 19: Liverpool striker Mohamed Salah will likely miss the club's next Premier League game after the Egyptian soccer association said that he had tested positive for the coronavirus for a second time.

The 28-year-old Salah, who has mild symptoms, has been in self-isolation in Egypt's Red Sea resort of el-Gouna, where he arrived earlier this week. He had previously self-isolated in a Cairo hotel.

He first tested positive for the virus on Friday on the eve of Egypt's Africa Cup of Nations qualifier against Togo. The Pharaohs beat Togo 1-0 in Cairo, and 3-1 on Tuesday in Togo's capital, Lome.

He's now set to miss Liverpool's first game after the international break against Leicester on Sunday.

Striker Ahmed Hassan Kouka of Olympiacos tested positive after his return to Cairo with the national team from Togo, the association said. The three arrived in their home country earlier this month to join the national team for the latest round of 2021 Africa Cup of Nations qualifiers.

After his return last week, Salah was pictured — sometimes without a face covering — dancing among dozens of people at his brother's wedding in Cairo. He also attended a ceremony organized by the country's sports officials.

Egypt, a country of more than 100 million people, has had a slight increase in daily recorded coronavirus cases, with officials warning of a second wave of the pandemic. The country has reported around 111,300 confirmed cases including at least 6,481 fatalities.