A solid wicket-keeper batsman for Auckland, Dykes played 31 first-class games between 1967 and 1977, effecting 81 dismissals and making 723 runs at an average of 20. 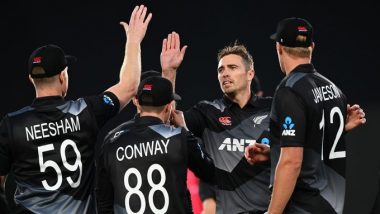 Mount Maunganui, November 30: The New Zealand cricket team stepped out to take the field wearing black arms bands during their third and final T20I against West Indies on Monday. The side is wearing black armbands to recognise Ross Dykes' service to the game in New Zealand.

Dykes, one of the great servants of cricket in New Zealand and New Zealand Cricket, has died in Auckland, aged 75. A solid wicket-keeper batsman for Auckland, Dykes played 31 first-class games between 1967 and 1977, effecting 81 dismissals and making 723 runs at an average of 20.

Dykes was the convener of selectors between 1996 and 2000; his most notable decision coming in early 1997 when his panel oversaw the selection of an 18-year-old Daniel Vettori, New Zealand's youngest Test player.

Dykes, who is survived by his wife Sue, four children, and three grandchildren, acted for several years as an NZC match referee, overseeing first-class games, List A matches, and women's internationals. Meanwhile, New Zealand have won the toss and opted to bowl first against West Indies in the third T20I.

Mitchell Santner is captaining New Zealand for the first time and the side has included Daryl Mitchell, Scott Kuggeleijn, and Hamish Bennett in the playing XI.

New Zealand won the first T20I in Auckland on November 27 by five wickets in a rain-shortened encounter and then rode on the fastest T20I hundred for a Kiwi player by Glenn Phillips in the second game on Sunday to seal the series.