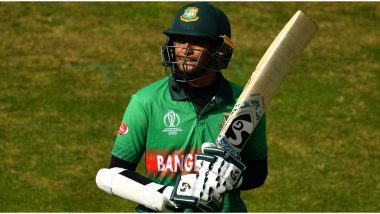 Dhaka, January 16: Former skipper Shakib Al Hasan returned to the national team as Bangladesh named an 18-player squad for the three-match ODI series against the West Indies on Saturday. Last year, Shakib was handed a 12-match ban for breaching the ICC's anti-corruption code. The international body had charged Shakib with failing to report two approaches to engage in corrupt conduct during the tri-series and in an IPL match.

"The Bangladesh Cricket Board (BCB) announces the squad for the three-match ODI series against the West Indies. Off-spinner Mahadi Hasan and pace bowlers Hasan Mahmud and Shoriful Islam are the uncapped players in the squad," the BCB said in an official statement.

Former skipper and pacer Mashrafe Mortaza, who was left out of the 24-man ODI preliminary squad announced on January 4, has not been named in the final squad. IPL 2021 Players' Auction: February 4 Registration Deadline; No Player Agent Allowed.

The Sher-e-Bangla National Cricket Stadium in Mirpur will hold the first two matches on January 20 and 22 while the third and final ODI will be played at the Zahur Ahmed Chowdhury Stadium, Chattogram on January 25.

Meanwhile, West Indies leg-spinner Hayden Walsh Jr has been ruled out of the ODI series after testing positive for coronavirus. Walsh who is asymptomatic first returned a negative test result on arrival into Bangladesh in the weekend and then had a positive return on his test in Dhaka. This result was verified by a second positive test.