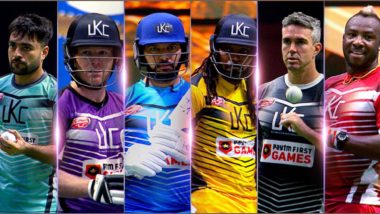 The unique star-studded event, that gets underway from December 24, shortens the game into 4 innings of 15 balls each, where each UKC gladiator will go head-to-head against every other, increasing the stakes for the right to be crowned the best in the world.

The first exhilarating season of UKC will see six global superstars who will be UKC contenders. They go head-to-head against each other, every day at 9:30 PM on the Star Sports Network from December 24 to January 1, with some surprise appearances from other global superstars.

In an official release issued by Star India, Yuvraj said: "Cricket has been at the heart of every Indian fan and, but it needs to constantly evolve, constantly excite. UKC is that evolution. This brand-new format is wonderful. It's what cricket is about. Player versus player. No distractions. One on one. It's exciting and it's the future of cricket that I know will strike a chord with viewers and fans. I am up for this challenge to be the best in the world and hope to emulate my 2007 T20 World Cup feat of six consecutive sixes in the UKC as well. Hoping for a great show in Dubai and to beat all the others."

The first of its kind, this 16-match tournament will see the introduction of new cricket rules in a new one-on-one cricket match format. Each match will consist of 2 UKC contenders squaring off against each other across 4 innings of 15 balls each in every match.

However, if a batter who hits the bullseye (behind the bowler) scores 12 runs and gains an extra ball to play. Bullseye on the square of wickets will get the batter 4 runs. Every time a batter gets out, 5 runs are deducted from the total.