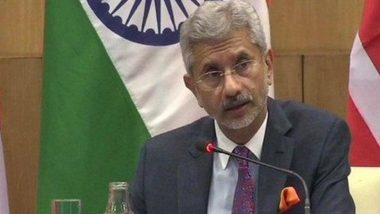 Islamabad, October 17: Pakistan on Saturday rejected what it called "unwarranted" remarks by External Affairs Minister S Jaishankar at a recent virtual event about the current ties between the two neighbours.

Speaking during an online event hosted by the Asia Society, Jaishankar on Friday said, "In terms of your… question, how are we with Pakistan. Well, I am afraid we're still at the, if not the perennial issues, at least the long-lasting ones, which is terrorism from Pakistan continues." Also Read | Navratri 2020: Joe Biden, Kamala Harris Wish ‘Happy Navratri’ to Hindu Americans as Nine-Day Festival Starts.

"Terrorism from Pakistan remains publicly acknowledged by their government as a policy that they are justifying. So it makes it very hard to conduct normal relations with them,” he said.

Ties between India and Pakistan nosedived after a terror attack on the Pathankot Air Force base in 2016 by terror groups based in the neighbouring country. Subsequent attacks, including one on Indian Army camp in Uri, further deteriorated the relationship.