Hyundai Creta Hits Another Milestone, 2 Lakh Made in India Units Exported to 88 Countries

The automaker's plant in Tamil Nadu manufactures global quality products for both domestic and international markets, he added. Last year, HMIL exported 1,81,200 units with 792 customised variants according to country-specific preference and demand, the company said. 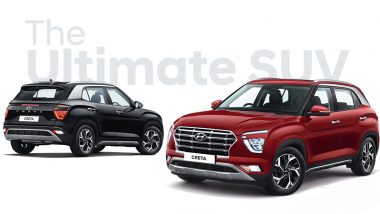 "Launched in 2015, Creta established its supremacy as a highly aspirational brand among customers globally. The magnanimous two lakh export milestone achieved by the model is a testimony of Hyundai's undeterred focus and commitment to 'Make in India,' Made for the world," HMIL MD and CEO SS Kim said in a statement.

With an export share of 26 per cent (2019) in passenger car exports from India, Hyundai remains a significant contributor to the Indian automobile industry and the government's Make in India initiative, it added.

As the country's largest exporter of automobiles, Hyundai had surpassed the 30 lakh vehicle export milestone earlier this year. The company currently exports 10 models to 32 countries in South America, 28 nations in Africa, 26 countries in Asia Pacific and one country each in North America (Mexico) and Europe.