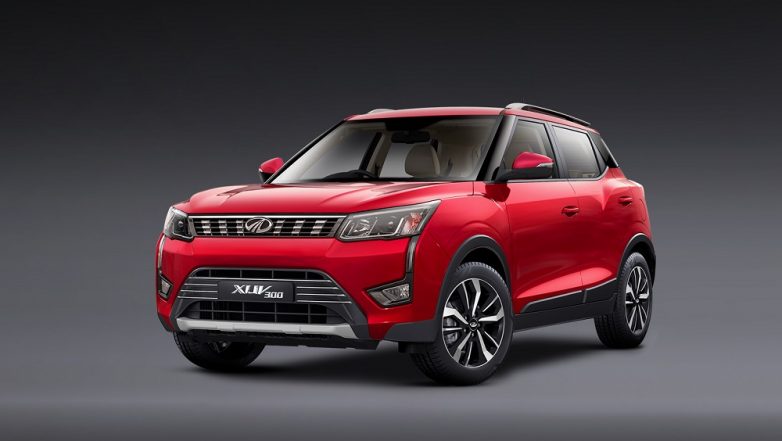 Mahindra, a leading utility car maker is all set to launch the eagerly awaited Mahindra XUV300 sub-compact SUV at an event in India tomorrow. To be based on SsangYong Tivoli, the sub-compact SUV has already received 4000 bookings ahead of its launch. With already more than 60,000 enquiries in the country, the Mahindra XUV300 could emerge as a strong contender for Maruti Vitara Brezza, Tata Nexon and Ford EcoSport. Though the SUV inherits some characters from Tivoli, but the manufacturer has ensured necessary changes to the XUV300, which includes new steering mechanism and all-new suspension setup. Mahindra XUV300 Official Bookings Now Open; India Launch Next Month.

Taking an inspiration from a Cheetah, the exterior design is underlined by a modern grille, nicely sculpted bonnet, shoulder & body lines, elevated stance that gives a bold road presence. The Maruti Suzuki Vitara Brezza rival will be offered in 4 variants - W4, W6, W8 and W8 (O).

On the feature front, the new Mahindra XUV300 will be equipped with host of features such as 7 airbags, sunroof, LED projectors headlamp and LED tail lamps, and 17 inch alloy wheels. The SUV will also feature segment-first features such as dual zone climate-control, front parking sensors, steering modes as well as heated wing mirrors. Mahindra S201 SUV Officially Christened as Mahindra XUV300; To be Launched in India by February 2019.

The wait is almost over. Get ready for the biggest launch of the year. The #MahindraXUV300 is coming. One day to go!https://t.co/vvmnebm3K0 pic.twitter.com/sG9Ndr19tB

Under the hood, the new Mahindra XUV300 will be offered in both petrol and diesel engine options. The petrol will be all-new 1.2-litre G80 turbocharged petrol mill whereas the oil burner will be a 1.5-litre unit. Transmission duties will be carried out by a 6-speed manual gearbox. However, the company is expected to launch an automatic variant of the SUV, which might be offered later on. As far as the prices are concerned, the new Mahindra XUV300 is likely to be priced in between 8 lakh to 10 lakh (ex-showroom).