20 Years of Priyanka Chopra Winning Miss World: From Crowing Moment to Her Mother Worrying About Her Studies, Watch Videos of Her Journey

This day in the year 2000, Priyanka Chopra brought home the Miss World crown. 20 years on and she is the reigning queen of the film industry - not just Bollywood but Hollywood as well. Priyanka's success today makes mothers across the nation dream bigger for their daughters. 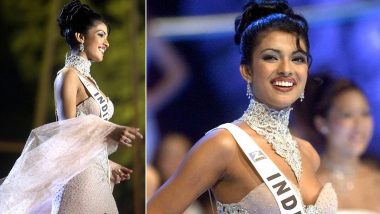 This day in the year 2000, Priyanka Chopra brought home the Miss World crown. 20 years on and she is the reigning queen of the film industry - not just Bollywood but Hollywood as well. And to think of it, her mother, Madhu Chopra, had almost sent her pictures to Miss India pageant merely as a joke. Well, from giving a wrong answer to a wardrobe malfunction, Priyanka had to brave through it all to win the crown. All well's that ends well, but Priyanka's story is still unfinished. She will be talking more about her journey to and after winning Miss World in her upcoming memoir, Unfinished, which has already broken pre-sales record to become the number one seller in the US. Priyanka Chopra Jonas' Memoir, Unfinished Becomes the Best Seller in the US in Less Than 12 Hours.

If you think that pageants are superficial celebrations of beauty, then Priyanka is here to prove you wrong. "I do think pageants are subject to a lot of stereotyping, and some of them deserve it too, but my experience with Miss World wasn't like that," she said in an interview with ELLE UK. "It was focused on being a woman of substance -- how well you'd be able to solve world issues, what kind of orator you are etc." Priyanka Chopra Jonas Celebrates 20 Years Of Her Crowning Moment At Miss World 2000; Madhu Chopra Recalls Her Daughter’s Big Win (Watch Video).

Check Out Priyanka's Throwback Pic To The Moment:

She has also reflected upon her wardrobe malfunction on the pageant. "I won Miss World, my dress was taped on to me. By the time I won at the end I was sweating so much because it was so stressful that the entire tape came off," The Sky is Pink actor told People in an interview.

Check Out Priyanka's Mother Talking About The Win In This Video:

Of course, Priyanka's mother was happy and so was the entire nation. But, a mother is a mother after all. In a video, Madhu revealed recently, "When I hugged her I spoke the stupidest thing that should have been...Instead of telling her that I’m so glad, so happy that you're Miss World, I said, 'Babe, now what will happen to your studies?"

(The above story first appeared on LatestLY on Nov 30, 2020 04:04 PM IST. For more news and updates on politics, world, sports, entertainment and lifestyle, log on to our website latestly.com).