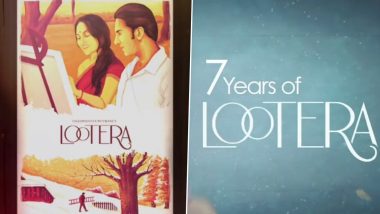 Ranveer Singh and Sonakshi Sinha's Lootera completes seven years! The Vikramaditya Motwane directed romantic period drama is considered to be one of the finest movies till date. It is partly based on author O. Henry's 1907 short story The Last Leaf. Of course, it did not receive the kind of response it deserved back in 2013 but over a period of time, the cine-goers found depth in it and the film is finally being appreciated. To mark this special moment, Ranveer posted two beautiful montages on his Instagram. 5 Years of Dil Dhadakne Do! Ranveer Singh Shares a Heartthrob Selfie From the Sets of the Film (View Post).

In the first montage, there are sketches of some of the iconic moments from the film. Ranveer's 'Varun babu' and Sonakshi's 'Pakhi' get a sweet ode through this montage video.

While in the other one, we see Ranveer's character's transformation through his different looks. The stills have him in his signature stylish hat look to the intense version by the end of the film. His wife and actress Deepika Padukone commented on the same saying, "One of your best performances!" while 'Pakhi' Sonakshi simply exclaimed, "Babaaaaaa." Check them out below.

One more thing that we cannot skip mentioning is the amazing music album of this movie. Amit Trivedi gave soulful songs and background music to the film and the meaningful lyrics were penned down by Amitabh Bhattacharya. All songs viz "Sawaar Loon", "Ankahee", "Shikayatein", "Monta Re", "Zinda", "Manmarziyan" are considered to be pure gems. We hope to see more such 'rich with content and music' projects in future!

(The above story first appeared on LatestLY on Jul 05, 2020 02:20 PM IST. For more news and updates on politics, world, sports, entertainment and lifestyle, log on to our website latestly.com).