Abhay Deol on Calling Out Lobby Culture in Bollywood: Sushant’s Death Definitely Sort of Pushed Me to Speak Up

Abhay Deol reveals how Sushant's death triggered him to speak out against the lobby culture and unjust practices prevalent in the industry. 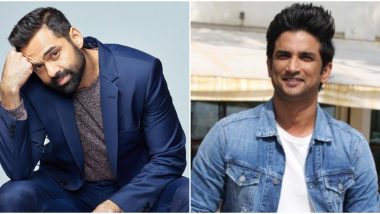 Abhay Deol may be an insider in Bollywood, coming from one of the influential families but he certainly believes he's still an outsider. The actor through the years has tried really hard to work against the tide in the industry but there was a time when he stopped being an idealist and was inclined towards being a realist instead. However, but demoting him to a supporting role in Zindagi Na Milegi Dobara at awards shows made him realise the harsh reality once again. Abhay Deol Says ‘Audience Is Way Smarter Than We Give Them Credit For’.

"Positioning was based on market value of the artiste not on the structure of the plot of the movie. And the shocking thing is that it was all accepted because that’s the way the industry functions,” he said while recalling the incident in his chat with Hindustan Times. Sushant Singh Rajput's death has certainly stirred a new controversy in the industry and his tragic premise promoted Deol to speak up against these unjust practices once again.

“Zindagi Na Milegi Dobara”, released in 2011. Need to chant this title to myself everyday nowadays! Also a great watch when anxious or stressed. I would like to mention that almost all the award functions demoted me and Farhan from main leads, and nominated us as “supporting actors”. Hrithik and Katrina were nominated as “actors in a leading role”. So by the industry’s own logic, this was a film about a man and a woman falling in love, with the man supported by his friends for whatever decisions he takes. There are many covert and overt ways in which people in the industry lobby against you. In this case it was shamelessly overt. I of course boycotted the awards but Farhan was ok with it. #familyfareawards Very creative artwork @kalakkii

“Sushant’s death definitely sort of pushed me to speak up a little bit. But, this isn’t my first time speaking up. In the past, I’ve taken on the biggest. I’m sorry it took someone’s death to wake everybody up. But I’m glad that people have taken note and they want to be heard. They’re asking for a change not just from the outside of the industry but even from the inside. What’s good today is that actors are speaking out. I had become quiet because I didn’t want to be the only one screaming. No man is an island, after all. And, without support, I alone couldn’t have brought about the change we need. So, I decided to speak up once again," he continued. Abhay Deol Narrates the Hypocrisy of Indian Film Awards, Reveals the Bias Farhan Akhtar and He Faced During Zindagi Na Milegi Dobara (View Post).

Speaking about how your mental health can go for a toss in the industry, Abhay said, “People planting false stories about you, paid-for reviews being deliberately negative, people gaslighting you within the industry to sabotage you, people robbing you of a nomination or a win at an award show — these are some of the ways in which you make another person’s failure your success. Now, imagine a person with a mental illness being thrown in this toxic environment. For sure, it would take a toll. They are, after all, more vulnerable."

“Dev.D” released in 2009. I spent a year narrating the idea to several people before I got Anurag on board to direct it. I remember people’s reaction upon hearing my narration, it was always, “it’s too much of an art-film”. Lucky for me Anurag got it. I had read the book and I could see that the character was a chauvinist, a misogynist, entitled, and arrogant. Yet he had been romanticized for decades! The women on the other hand were strong and had integrity, but there was still that expectation for them to love their man no matter what. I wanted to change that. I wanted to empower them, shed the image of the “good, devoted, woman”. It was time to make them independent, not defined by the man they love, or by men in general. Which is why Paro calls out Dev’s faults and puts him in his place. In my version Dev gets shot by the police (he becomes a drug dealer) outside Paro’s house and dies just like in the book. Chanda does not fall in love with him, and neither is she ashamed of being an East European high class escort (again, in my version 😊). She’s the strongest character of the 3, and isn’t afraid of being judged. She does empathize with Dev, seeing how broken he is, and I went with the “prostitute with the heart of gold” theme from the book. Anurag felt a happy ending would make the film more accepted by the audience, and his twist was to have Dev & Chanda fall in love. My vision was too dark! I went with the flow, and even brought my buddies @twilightplayers to feature in it. The rest is history. #makingwhatbollywouldnt

Abhay Deol had his own struggles and this is despite him coming from a known family. He believes lobby culture is so deep-rooted within the industry that no one bothers questioning it. "No one thinks about standing up or bothering to do anything. They are all ready to conform, which is why they know that they can get away with it. The reason I can say this is because I grew up in a film family and I’ve heard of these games even as a child. As a kid, I heard it through other people’s experiences, and as a professional, I have seen it myself," he asserted.

Hopefully, the actor's attempts won't go in vain this time.

(The above story first appeared on LatestLY on Jun 24, 2020 10:03 AM IST. For more news and updates on politics, world, sports, entertainment and lifestyle, log on to our website latestly.com).