The disheartening news has everyone sending their prayers for the passengers and several Bollywood celebrities also took to social media for the same. 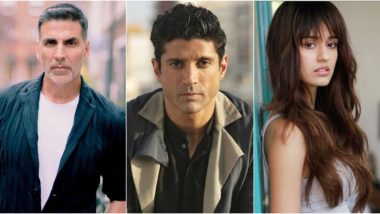 2020 seems to be a year full of bad news. While the country has already been ravaged due to floods in Assam, Bihar and Kerala, yet another unfortunate incident has now struck the country. An aircraft of Air India Express crashed after overshooting the runway at Calicut International Airport on Friday, August 7 evening. The plane, which flew from Dubai carrying 191 persons, crashed into two pieces as per reports. According to a News18 report, a pilot and two passengers were killed in this accident. The disheartening news has everyone sending their prayers for the passengers and several Bollywood celebrities including Akshay Kumar, Farhan Akhtar, Ajay Devgn also took to social media for the same. Air India Express Dubai-Kozhikode Plane Crash: Pilot Dead, Aircraft Breaks Into Two Pieces; Here's What We Know So Far.

The country has been praying for the safety of those affected in this crash and celebrities such as Akshay Kumar, Farhan Akhtar, Disha Patani, Randeep Hooda were among the first ones to react to this tragic incident. Taking to Twitter, Disha expressed shock and grief over the crash and wrote, "Deeply shocked by the tragic crash landing of the #AirIndia aircraft that overshot the runway in Kozhikode. Prayers for all passengers, pilots & crew onboard and at Calicut Airport. Terrible year this." Randeep Hooda also tweeted a message sending his prayers for the passengers and crew members of the fight. Here are more reactions from Bollywood celebs. Air India Express Dubai-Kozhikode Plane Crash: Dulquer Salmaan, Prithviraj Sukumaran React To The Tragic Incident.

Terrible news! Praying for the safety of all the passengers and crew onboard the #AirIndia Express flight. My deepest condolences to those who have lost their loved ones 🙏🏻

Thoughts with the passengers, the @airindiain crew and deepest condolences to the families of the deceased. #KozhikodeAirCrash 💔

Deeply shocked by the tragic crash landing of the #AirIndia aircraft that overshot the runway in Kozhikode.

Prayers for all passengers, pilots & crew on board and at Calicut Airport. Terrible year this🙏🏼🙏🏼🙏🏼🙏🏼

Disturbed by the #AirIndia flight tragedy. My prayers are with all the passengers and crew members onboard and deepest condolences to those who lost their loved ones.

Terribly shocking to hear the tragic news of Aircraft crash of the #AirIndia that overshot the runway in Kozhikode which was Flying back from Dubai..

Prayers for the safety of all the passengers and crew members at Calicut airport. 🙏🏼🙏🏼🙏🏼

Terrible news #airindia So sorry to hear about the pilots. Prayers for all 💔🙏🙏🙏

According to a statement issued by Air India, rescue operations are on and passengers are being taken to hospital for medical care. The airlines confirmed in their statement, there were 174 passengers, 10 Infants, 2 Pilots and 5 cabin crew onboard the aircraft. We pray for the safety of the passengers and crew members affected by this accident.

(The above story first appeared on LatestLY on Aug 07, 2020 10:10 PM IST. For more news and updates on politics, world, sports, entertainment and lifestyle, log on to our website latestly.com).