Bollywood star Akshay Kumar, who visited the Bravehearts of the Border Security Force (BSF) on Thursday (June 17), donated Rs 1 crore for a school building in a remote village. Read on. 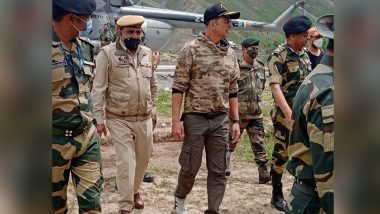 Bollywood star Akshay Kumar, who visited the Bravehearts of the Border Security Force (BSF) on Thursday (June 17), donated Rs 1 crore for a school building in a remote village. Akshay visited Tulail village along the Line of Control (LoC) in Jammu and Kashmir's Bandipora district and the school for which he donated will be named after his father Hari Om. Akshay Kumar Donates Rs 1 Crore to the Gautam Gambhir Foundation; Delhi MP Thanks the Superstar for Helping the Needy.

Reportedly, the Mission Magal actor reached the village by helicopter around noon and then began interacting with locals and the Border Security Force.

He had shared the pictures from his visit on his Twitter handle and wrote, "Spent a memorable day with the @bsf_india Bravehearts guarding the borders today. Coming here is always a humbling experience... meeting the real heroes My heart is filled with nothing but respect."

Dressed in a camouflage print hoodie and pants, the actor looked dashing as ever. He rounded up his dapper look with a cap, white sneakers, and cool shades. While in one of the pictures, Akshay can be seen striking a pose with the BSF personnel in front of a chopper, in another one he is seen shaking a leg with them. Akshay Kumar Pays a Visit to BSF Jawans in Kashmir at LoC Forward Post (View Tweet).

The actor not only clicked pictures with the jawans but also danced with them. He also paid respect to the jawans who sacrificed their lives for the country by laying a wreath on the war memorial. The official Instagram handle of BSF shared pictures from the ceremony. In the caption, they wrote, "DG BSF Sh Rakesh Asthana paid floral tributes in a solemn wreath-laying ceremony to Seema Praharis who made the supreme sacrifice in the line of duty. Actor Akshay Kumar also accompanied DG BSF & paid homage to the fallen braves."

Meanwhile, on the work front, Akshay had been shooting for his upcoming movie 'Ram Setu' with Jacqueline Fernandez and Nushrratt Bharuccha. The movie is being helmed by Abhishek Sharma.

Apart from Ram Setu, the actor has several other exciting films in the pipeline including Housefull 5, Bachchan Pandey, Atrangi Re, Bell Bottom, and Sooryavanshi.