Akshay Kumar Hails Taapsee Pannu As She Celebrates 6 Years of Baby, Says ‘Proud of You and Your Onwards and Upwards Journey’ 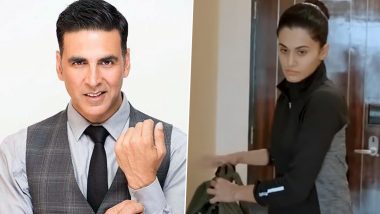 Bollywood star Akshay Kumar is proud of actress Taapsee Pannu's growth in career. The compliment from the star came after Taapsee tweeted posters of "Baby" on Saturday and wrote: "Dear actors, Number of minutes don't matter, the impact u leave with what u do in those minutes ...... matters. 7 minutes that changed the direction of the tide for me FOR GOOD. Yours truly, Naam Shabana." Laxmmi Bomb: Taapsee Pannu Expresses Disappointment on Akshay Kumar Film Not Releasing in Theatres, Khiladi Replies ‘The Show Must Go On’.

Akshay replied to her tweet saying: "Absolutely! Always make the most of what you have... proud of you and your onwards and upwards journey."

Absolutely! Always make the most of what you have...proud of you and your onwards and upwards journey :) https://t.co/c2tnYDtmu4

(The above story first appeared on LatestLY on Jan 23, 2021 09:30 PM IST. For more news and updates on politics, world, sports, entertainment and lifestyle, log on to our website latestly.com).