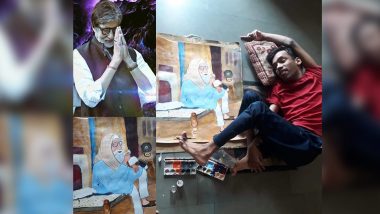 Bollywood actor Amitabh Bachchan has a humongous fan following all across the globe. People throng the vicinity of his residence in Mumbai for his single glimpse. Fans have proved their love and fandom in various ways. But this particular fan-art and the efforts taken by the fan beyond is beautiful. Big B shared pictures of painting made by a specially-abled fan, who is an artist named Aayush and was humbled by the same. Amitabh Bachchan Reminisces Meeting Fans Outside His Residence With a Humble Tweet (View Pics).

The 77-year-old superstar shared the pictures of the talented artist and his art. The artist brought to life on canvas, Sr Bachchan's on-screen avatar from his recent film Gulabo Sitabo.

AB wrote, "This is Aayush .. divyaang , physically challenged or better to say , specially abled.. cannot use his hands, so paints with his feet .. it was a privilege when I met him at home .. bless him and his superior talent .. gifts me with this .. " Check out the post below.

It's been long since the cine star got to meet his fans in person through his regular Sunday greet sessions. He reminisced those days through his recent post where he shared the pictures of him and his fans. Speaking of his film, he was recently seen in Shoojit Sircar's Gulabo Sitabo. He co-starred with Ayushmann Khurrana for this fun slice-of-life film. The movie was originally going get a theatrical release but was finally released on Amazon Prime.

(The above story first appeared on LatestLY on Jun 20, 2020 01:25 PM IST. For more news and updates on politics, world, sports, entertainment and lifestyle, log on to our website latestly.com).