Ankita Lokhande Reacts to Rhea Chakraborty's Statements, Clarifies Details of Her Last Conversation With Sushant Singh Rajput and the Ownership of Her Flat (View Tweet)

Rhea also spoke about Sushant's ex-girlfriend Ankita Lokhande, not being in touch with the actor and claimed that Ankita is still using the same flat that Sushant paid for. Responding to the same, Ankita has now taken to Twitter to clarify her side. 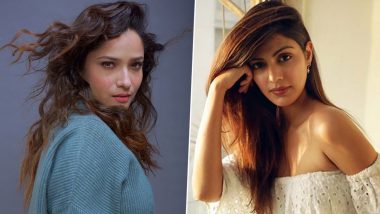 The biggest scandal that rocked Bollywood in 2020 has been actor Sushant Singh Rajput's shocking death. The actor reportedly died by suicide on June 14 and the following two months have seen a shocking turn of events as his actress-girlfriend Rhea Chakraborty finds herself in the eye of the storm as one of the prime accused. While the ongoing case is being investigated by CBI, ED and also NCB, Chakraborty in a recent tell-all interview with India Today, revealed her side of the story. Whilst addressing several talking points of the case, Rhea also spoke about Sushant's ex-girlfriend Ankita Lokhande, not being in touch with the actor and claimed that Ankita is still using the same flat that Sushant paid for. Responding to the same, Ankita has now taken to Twitter to clarify her side. Rhea Chakraborty Claims'#MeToo Allegations Involving Sanjana Sanghi Destroyed Sushant Singh Rajput's Mental Sanity (Details INSIDE).

The Sushant Singh Rajput death case has gotten murkier by the day allegations being hurled from all sides. In first sit down interview relating to the Sushant Singh Rajput case, Rhea Chakraborty spoke about many things from nepotism to drugs and also about his friends and ex-partners. When asked about Ankita's claims of Sushant Singh Rajput 'changed'after he met her, Rhea spoke about Ankita's equation with the late actor and said,"When was the last time she spoke to him? Not in the last 4 years at least. Then she says he spoke to her during ‘Manikarnika’ shoot. She stays in his flat and claims it’s her flat.”

Clarifying details about her house, a few weeks ago, Ankita had taken to social media and even shared screen grabs of her house registration papers. Once again, responding to Rhea's claims, the actress took to Twitter to share a long note. Denying Rhea's claims, Ankita wrote, "Neither in any platform I have ever said that me and sushant were in touch with each other after our separation. Fact is what I have said while shooting for Manikarnika, sushant has commented on one of my poster posted on a friend's insta post. Mukesh Chabra, he just wished me luck for the project and in a courteous way I replied. So I deny Rhea's claim that I have said we spoke on the phone."Sushant Singh Rajput’s Former Manager Rubbishes Rhea Chakraborty’s Claims That Says Actor Was on Drugs and Went Through Depression in 2013.

Ankita further also addressed Rhea's claims about the house and wrote, "About the Flat I have already cleared and family has no different opinion opposite mine." Before Rhea Chakraborty, Sushant's former girlfriend, Ankita Lokhande had given an interview with a popular news channel where she spoke about the Sushant she knew and had refused to accept a 'depression' angle to his case.

(The above story first appeared on LatestLY on Aug 27, 2020 10:40 PM IST. For more news and updates on politics, world, sports, entertainment and lifestyle, log on to our website latestly.com).