Indian singer, Arjun Kanungo's father passed away on Wednesday. He was reportedly battling stage 4 live cancer. The "Baaki Baatein Peene Baad" singer shared a throwback picture of him and his father. 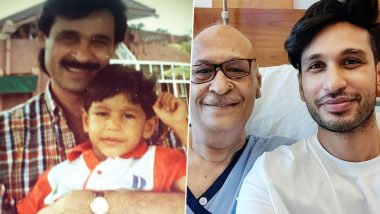 It is indeed one of the saddest weeks of 2020. While the entire nation is mourning the death of two amazing actors, Irrfan Khan and Rishi Kapoor, here comes another sad news. Indian singer, Arjun Kanungo's father passed away on Wednesday. He was reportedly battling stage 4 live cancer. The "Baaki Baatein Peene Baad" singer shared a throwback picture of him and his father to inform the fans about this heartbreaking news. Rishi Kapoor's Family Releases Official Statement on His Demise, Says 'He Would Like to be Remembered With a Smile and Not With Tears'.

In his caption, he wrote, "Until we meet again Dad. Rest in peace." The fans of the singer and his industry colleagues were heartbroken to hear this news. They offered condolences to him on social media. Rapper Badshah commented, "My prayers brother im sure he must have been a proud father." On the other hand, filmmaker Anurag Kashyap wrote, "So sorry to hear it Arjun.. May he rest in peace . My condolences to you and your family." Here, see Arjun Kanungo's Instagram post dedicated to his father.

Until we meet again Dad. Rest in peace.

Earlier, in one of his posts, he had written a heartwarming note that read, "My dad begins his second round of chemo today. He has stage 4 liver cancer which is so fucking scary but he has been fighting it like a champ and after the first round things are looking up. Cautiously optimistic, i am... I would not wish this on anyone. But he's been fighting it with so much dignity and I'm really proud of him." Indeed, it is simply a terrible time for everyone right now and we hope Arjun and his family finds strength in coping up with this irreparable loss.

(The above story first appeared on LatestLY on Apr 30, 2020 12:40 PM IST. For more news and updates on politics, world, sports, entertainment and lifestyle, log on to our website latestly.com).