Atrangi Re: New Still of Dhanush and Sara Ali Khan Hits the Internet; Shooting of Aanand L Rai’s Film to Resume in October 2020 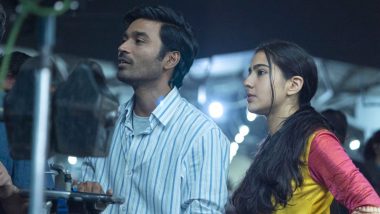 Dhanush had made his acting debut in Bollywood in 2013 with the film Raanjhanaa and then two years later he was seen in Shamitabh. Atrangi Re is his third Hindi project for which he is teaming up with actors Akshay Kumar and Sara Ali Khan. The upcoming flick, directed by Aanand L Rai, is reportedly set commence the second schedule in October 2020. A new still of Dhanush and Sara from the sets of the film has dropped online. Atrangi Re: Akshay Kumar, Sara Ali Khan, Dhanush Starrer Goes On Floors Today!

Talking about the shooting of the second schedule of Atrangi Re, director Aanand L Rai said, “During this lockdown, I've taken out a lot of time to prepare for the upcoming schedules of Atrangi Re. I'm really excited to start the next schedule, which is planned to happen in Madurai, October onwards, and then with Akshay for a month in Delhi and Mumbai, with all safety precautions in place, of course,” reports TOI. Sara Ali Khan to Romance Akshay Kumar and Dhanush in Atrangi Re? Is She Playing a Double Role?

Dhanush And Sara Ali Khan In Atrangi Re

UPDATE... #AkshayKumar, #Dhanush and #SaraAliKhan... #AanandLRai to commence second shooting schedule of #AtrangiRe from Oct 2020 in #Madurai... Music by #ARRahman... Here's a glimpse from the film... pic.twitter.com/Eq2TEFD1Ra

Atrangi Re is produced under the banners of T-Series, Colour Yellow Productions and Cape of Good Films. The film’s music is composed by AR Rahman whereas the cinematography is handle by Tumbbad fame Pankaj Kumar. The makers had planned to release the film on the occasion of Valentine’s Day next year. However, seeing the current situation and since there is no clarity by when the cinema halls will reopen, the theatrical release date could also be pushed back.

(The above story first appeared on LatestLY on Jul 27, 2020 12:10 PM IST. For more news and updates on politics, world, sports, entertainment and lifestyle, log on to our website latestly.com).