The Fitoor song from YRF's Shamshera has been winning hearts on Twitter with its beautiful visuals and Ranbir-Vaani's scorching hot chemistry. 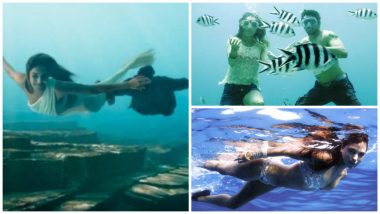 The makers of upcoming action period drama, Shamshera, dropped the second song from the movie - "Fitoor" - and it is an absolute visual treat. A sensual love song picturised on a shirtless tanned Ranbir Kapoor and an exquisitely glammed Vaani Kapoor, "Fitoor" is composed by Mithoon with lyrics by director Karan Malhotra himself while Arijit Singh and Neeti Mohan have crooned this beautiful track. Shamshera Song Fitoor: Ranbir Kapoor, Vaani Kapoor Kiss, Cuddle and Romance Underwater in This Love Track.

While the song is soulful and the chemistry between Ranbir and Vaani is off the charts, it is the stunning locales and the striking cinematography that stand out in the track. Especially the underwater sequence that is beautifully shot. Cinematographer Anay Goswamy could be responsible for creating the most stunning-looking Hindi film of the year.

Watch the song below:

Speaking on songs that featured exquisite underwater scenes, here's a look at five Hindi songs that are our favourites when it comes to putting such visuals on screen.

"Dooba Dooba" may not be a Bollywood song per se, but this indi-pop song revolutionised music scene with its visuals back in the '90s. While the Mohit Chauhan-sung track is melodious, the noteworthy aspect about the song is how it lives up to its lyrics by showing the band in progressive stages of hydro submersion, till they reach a point where they play the instruments completely submerged!

Santosh Sivan's period drama is a mixed bag of a film, but it has some astounding camerawork, most evident in the above fantasy song, featuring Shah Rukh Khan and Kareena Kapoor Khan. The song features some underwater sequences that are beautifully shot, enhances by Anu Malik's lovely tune. From Shah Rukh Khan in Asoka to Salman Khan in Tubelight, 15 Times Popular Stars Were Miscast in Movies That Came Out This Century.

When this big-budget heist thriller came out, the multi-starrer, featuring Sanjay Dutt, Akshay Kumar, Lara Dutta, Zayed Khan and Katrina Kaif, hogged the news for being a film with extensive underwater sequences. While the movie was a failure, there are some exotic underwater scenes especially in this title track.

This melodious track from Ek Villain has a sequence where Shraddha Kapoor and Sidharth Malhotra go snorkelling in the ocean. The scene stands out thanks to some exquisite underwater visuals with corals and schools of fishes swimming around.

Time for an olden goldie! Anmol Moti is a 1969 fantasy film that featured Jeetendra and Babita in the lead roles, and is a fantasy film featuring jal paris, aquatic monsters and sea kingdoms. Of course, there would a song featuring underwater sets.

Though technically not a Bollywood song per se, there is a portion in the beginning of this track where Jr NTR and Ram Charan shake hands under water, that is quite splendid to say the least!

(The above story first appeared on LatestLY on Jul 07, 2022 04:56 PM IST. For more news and updates on politics, world, sports, entertainment and lifestyle, log on to our website latestly.com).