Bepannaah’s Taher Shabbir Opens Up About How Kangana Ranaut Roped Him For Manikarnika!

He also revealed that he knows Kangana from her Once Upon A Time In Mumbai days. 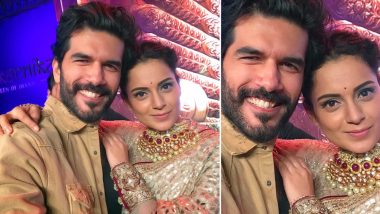 Actor Taher Shabbir has best of both worlds now. He has successfully created a space for himself in both Television and Bollywood industries. Even though Taher has only two television roles to his credit (Nisha Aur Uske Cousins and Bepannaah), both of them were pivotal roles, that garnered him a lot of eyeballs. And as for Bollywood, Taher has been an important part of films like Fan and Naam Shabana and will next be seen in Kangana Ranaut’s Manikarnika. This is the Real Reason Why Hrithik Roshan's Super 30 Didn't Clash With Kangana Ranaut's Manikarnika: Queen of Jhansi

However, in a recent interview with DNA, Taher opened up and revealed about how Manikarnika is not the first project that he and Kangana are working on. In fact, Taher was the assistant director to Milan Luthra during the making of Once Upon A Times In Mumbai, and that he and Kangana go a long way. Said Taher, “One thing that both Kangana and I have in common is that we’re both very patriotic. I guess because of our love for the country and horse-riding, she called me for this role. It’s a privilege working with her on such an important film like Manikarnika.” Kangana Ranaut's Recent Appearance at Manikarnika Music Launch Proves No One Can Nail a Saree As Well as Her: View Pics

Taher also revealed that Kangana used to train with him and co-director Ashutosh for her horse-riding parts in the film.

It can be recalled that Manikarnika ran into lots of trouble with first its director Radha Krishna Jagalamundi exiting the project due to prior commitments in the  South industry. Then actor Sonu Sood left the project and that issue blew out of proportion. Kangana’s film was also in the news for its impending clash with Bal Thackeray’s biopic ‘Thackeray’, but the actress maintained that nobody has pressurized her to change the release date of her film.

(The above story first appeared on LatestLY on Jan 16, 2019 01:35 PM IST. For more news and updates on politics, world, sports, entertainment and lifestyle, log on to our website latestly.com).