Bhoot Police Actor Saif Ali Khan Says He Has No Supernatural Fear, Reveals What Scares Him the Most

Saif Ali Khan has talked about what scares him. The actor says he has no supernatural fear. Saif now awaits the release of Bunty Aur Babli 2 and Adipurush. 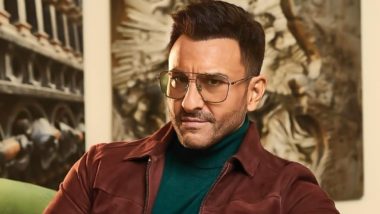 Saif Ali Khan, whose latest release is horror comedy Bhoot Police, has talked about what scares him. The actor says he has no supernatural fear. When asked by IANS if there was anything that scares him, Saif said: "Yes, of course!" The 51-year-old star, who plays a 'desi ghostbuster' in the movie named Vibhooti, added: "What scares me the most is family and loved ones you fear for them. That's the main thing." Bhoot Police Motion Poster Out! Saif Ali Khan, Arjun Kapoor, Jacqueline Fernandez, Yami Gautam’s Film's Trailer To Release on August 18.

However, he does not have any supernatural fear. "Supernatural fear, not really. Even though it is easy to say that in crowded Bombay. If you go out in the middle of nowhere you might feel differently," he said. However, the actor, who is married to Bollywood diva Kareena Kapoor Khan, loves reading about 'ghost stories'. Bhoot Police Movie Review: Saif Ali Khan and Arjun Kapoor's Quirky Bromance Makes This Horror-Comedy A Crisp Watch!

"I like the supernatural, I like reading about it or even ghost stories. Not horror so much but something that is slightly spooky," he wrote. Saif now awaits the release of Bunty Aur Babli 2 and Adipurush.

(The above story first appeared on LatestLY on Sep 16, 2021 09:31 PM IST. For more news and updates on politics, world, sports, entertainment and lifestyle, log on to our website latestly.com).