How excited are you to see their chemistry? 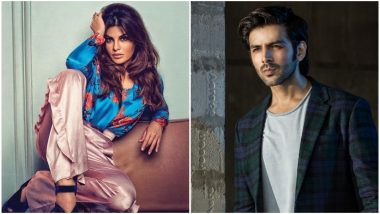 While Jacqueline Fernandez is waiting for her next release, Drive, with Sushant Singh Rajput to hit the screens, here's comes another major announcement from her. The Race 3 actress is all set to star in the Hindi remake of hit Kannada movie, Kirik Party. Jackie will collaborate with the current sensation Kartik Aaryan in this exciting project and we can't wait to see their chemistry on the big screen. Trade analyst, Taran Adarsh took to his Twitter announcement to make this big announcement and confirm their collaboration. Kartik Aaryan Steps Out Of His House In Gwalior; What Happens Next Is Unbelievable! View Pics.

Jacqueline Fernandez in the Hindi remake of #Kannada smash hit #KirikParty... Stars Kartik Aaryan in the lead... Produced by Ajay Kapoor [in the pic with Jacqueline], Dheeraj Wadhawan and Vrithika Laykar... Directed by Abhishek Jain. pic.twitter.com/q00xOpEgHk

Reports were rife that Kartik had replaced Sidharth Malhotra in this remake as the producers felt he was better suited for the project. Kirik Party was one of the highest grossing Kannada films, which ran for an impressive 150 days. The film will start rolling in October and it revolves around a central theme of how friendship and love can turn a boy into a compassionate man. Currently, Kartik is busy shooting for Luka Chuppi with Kriti Sanon. Ahem! What's Cooking Between Jacqueline Fernandez and Kartik Aaryan?

Confirming the news producer Ajay Kapoor had said, "We at Kyta Productions are very excited to start work on the Hindi remake of Kannada blockbuster Kirik Party with Gen-X star Kartik Aaryan. The film will also mark the directorial debut of Abhishek Jain, an extremely talented filmmaker. The film will go on floors this October."

(The above story first appeared on LatestLY on Sep 04, 2018 10:40 AM IST. For more news and updates on politics, world, sports, entertainment and lifestyle, log on to our website latestly.com).