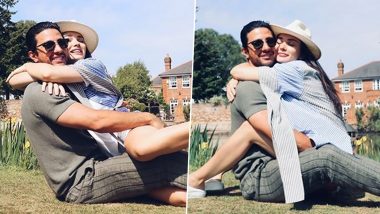 Amy Jackson is currently busy observing quarantine with her fiance George Panayiotou at their London residence and going by her recent pictures, they seem to be busy making some happy memories. The couple who welcomed their first child together had some elaborate plans of having a Greek wedding in October this year but post COVID-19 outbreak, they are most likely to delay it further. But until then, there's no harm in indulging in some frolicking session, right? Amy Jackson Shares Pros and Cons of Working at Home, Shares a Monochrome Pic of Husband and Son.

Amy took to her Instagram account to share some happy pictures with her man that instantly melted our hearts. We don't remember the last time we felt such warmth by looking at a couple's romantic pictures. Speaking about her pregnancy, the actress insists it was unplanned but they were ready for it. "We're at that stage where we're definitely ready for it. I don't think you can ever plan something perfectly, but we're in such a good place. We're happy together, we have a beautiful home and we're excited to be a mum and dad," she had said in her interaction with a UK magazine. Amy Jackson Shares an Adorable Picture of Her Son Andreas and it is the Cutest Thing You Will See Today.

The couple got engaged on January 1, 2019, and he popped her the question during their holiday in Zambia. "He proposed on a raft in Zambia, with the sun setting and over a private dinner. It was beautiful," the actress had said in her same interaction. George is the son of British property developer Andreas Panayiotou and the founder of The Ability Group. They own a chain of luxury hotels that include names like Hilton, Park Plaza, Double Tree etc.

(The above story first appeared on LatestLY on May 28, 2020 12:10 PM IST. For more news and updates on politics, world, sports, entertainment and lifestyle, log on to our website latestly.com).