Director Anubhuti Kashyap casts Ayushmann Khurrana as Dr Uday Gupta Uday Gupta who finds himself as the lone male student in the Gynaecology department. His reluctance leads to chaos, confusion, comedy and eventually, great camaraderie with his fellow classmates.In the end, the film succeds in driving home some solid social messages. 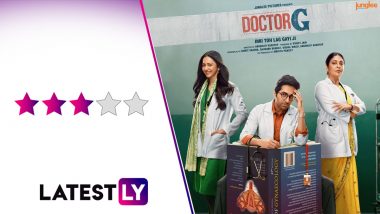 Doctor G Movie Review: That Ayushmann Khurrana charms audiences every single time he appears on the screen is a given. That he brings forth a rare blend of vulnerability and smarts that works for him is equally obvious. A cursory glance at his filmography quickly reveals that the charmer doesn't shy away from featuring in films that are topical, socially relevant, and are truly rooted. In directorAnubhauti Kashyap's directorial venture Doctor G, Khurrana attempts to drive home some solid message with a very balanced performance.  With his sincerity, Khurrana wins you over in a project that remains patchy in delivering entertainment. Doctor G: Ayushmann Khurrana’s Film Gets ‘A’ Certification, Makers Happy as ‘No Cuts Suggested’

Sometimes intentions behind making the film are so compelling that they force you to overlook the flaws that come along. This certainly isn't a Vicky Donor or A Badhai Ho, but Doctor G most certainly has its moment that will see you giggle at times and then, at times, ruminate over.  The film deals with a range of strokes womanhood comprises of- from her sexuality, her mistakes, her desires, and her triumphs in a very non-preachy style that eventually works. This endeavor is not out-and-out engagingly entertaining, but the fun lies in the crisp lines, in the sincere performances from the actors, and in its overall treatment.

Doctor G depicts the journey of an ambitious medical student Udaya Gupta (Ayushmann). The young lad aspires to become an Orthopedic surgeon, but due to challenging circumstances, he sees himself enrolling for a degree in Gynecology in order to secure his seat in Orthopedic (in the same hospital, to lap it up when it gets vacant.) Initially reluctant to grasp the subject, which according to him is 'suited' more for women,  Gupta eventually decides to stay put to lose his 'Male Touch' in order to serve in the truest sense of the word. Rakul Preet Singh’s Intimate Birthday Celebration With Arjun Kapoor, Malaika Arora and Bhumi Pednekar Is Where the Party’s At (View Pics)

Simply put, this is a wonderful concept that is very important to address. The canvas is very broad here and the makers clearly desire to capture every issue possible in a nuanced way. While they succeed in some parts, some parts miss the bite they needed and the impact they should have left behind.  The love story between Ayushmann and Rakul Preet for example doesn't particularly stand out as that bit looks hurriedly written. Shefali Shah's strong-headed character, as the HOD of the Gynecology department, on the other hand, stays with you thanks to the powerful performance delivered with tremendous conviction.

Thankfully, Dr Uday Gupta is not reduced to being a sobering mess. You can empathize with him, but he never comes across as a pitiful character even when his chips are down. All thanks to the clever writing and the taut screenplay. There are obvious flaws in the first half of the film as you feel some characters are just thrown in randomly and some sequences could have been done away with. Gupta's ragging for instance at the hand of his entire class, comprising only women, looks juvenile and even cringe-worthy. Rakul Preet Singh Pens the Sweetest Birthday Note for ‘Soul Sista’ Lakshmi Manchu on Instagram!

With many subtexts to deal with, the second half of the film tends to get a little preachy with the message about societal prejudices hammered down incessantly. This takes away from the film’s fun quotient, but the story continues to engage you thanks to the impactful performances. A special mention here for Sheeba Chaddha who wins our vote with her acting prowess as Dr Gupta's doting mother. Chaddha has a range that needs to be tapped into by our filmmakers.

As far as the performances go, Ayushmann Khurrana is both sincere and charming yet again with his craft. Rakul Preet Singh has a commanding presence and she looks pretty for the character that has been etched out. Shefali Shah and Sheeba Chaddha add heft to the proceedings.

Doctor G works because even with its glaring glitches it remains a light-hearted comedy with situations and characters that are relatable.  Director Anubhuti Kashyap attempts to drive home some important messages with the able support from that cast that dares to go beyond the obvious!

(The above story first appeared on LatestLY on Oct 14, 2022 11:00 AM IST. For more news and updates on politics, world, sports, entertainment and lifestyle, log on to our website latestly.com).