[Exclusive] Richa Chadha Confirms That She Will Get Married to Ali Fazal This Year!

Are you the one who was upset when Bollywood actress Richa Chadda and her beau Ali Fazal postponed their wedding last year (2020) due to the novel coronavirus? Then we have a piece of good news for you. As the actress have confirmed that the shaadi will mostly happen this year. Check it out. 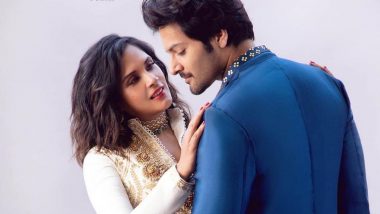 Are you the one who was upset when Bollywood actress Richa Chadda and her beau Ali Fazal postponed their wedding last year (2020) due to the novel coronavirus? Then we have a piece of good news for you. The lovebirds could tie the knot anytime soon this year. Yes, that's right! In an exclusive conversation with LatestLY, when the Lahore Confidential actress was asked about her wedding plans, she dropped hints that it's going to be 2021. When she was quizzed about her marriage, Richa said that she will get hitched "Very soon, as we (she and Ali) didn't get time last year due to COVID-19." Madam Chief Minister Movie Review: Richa Chadha’s Political Drama Has Surprises in Plenty but Not Powerful Enough (LatestLY Exclusive).

However, later when we told her that the wedding this year too will be also kind of impossible as the virus is still in the air, to which she was quick to react and said, "Yeah, but I think it will be this year (2021) only." She, later on, added that they are waiting for the vaccine and after its arrived, the shaadi shenanigans will follow. She also mentioned that hardly any Punjabi wedding is intimate and so they don't want to upset any relative or etc by not calling them for the D-day. Ali Fazal Opens Up About Delayed Wedding With Richa Chadha Due To Lockdown.

Well, we bet, after reading this, fans of Richa and Ali would be on cloud nine. Richa was last seen in Shakeela and Madam Chief Minister, wherein both the films were released in theatres and received quite a lukewarm response. However, she will be soon seen in Kunal Kohli directorial spy thriller Lahore Confidential streaming on ZEE5 from February 4, 2021.

Ali, meanwhile, is all set to dazzle Hollywood in Kenneth Branagh's remake of Death on the Nile, that also stars Gal Gadot and Armie Hammer. Stay tuned for more updates on their impending marriage!

(The above story first appeared on LatestLY on Jan 29, 2021 05:17 PM IST. For more news and updates on politics, world, sports, entertainment and lifestyle, log on to our website latestly.com).