Gangubai Kathiawadi was scheduled to be released in September but had to be postponed owing to the pandemic. The makers are yet to announce the new release date of the film. 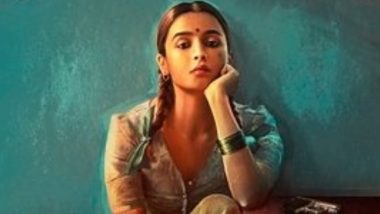 The coronavirus outbreak affected lives of people around the globe. Not only health, but even jobs have been hampered. Owing to the ongoing crisis, shooting of films, web series and other TV shows had to be stalled as lockdown was imposed across the country due to the rising number of cases. This majorly affected jobs of daily wage workers. But the several associations and celebs across industries came forward and helped setup a relief fund to help the daily wage earners working in the industry. Talking about Sanjay Leela Bhansali’s Gangubai Kathiawadi, the team has resumed shooting of the film almost after seven months. Gangubai Kathiawadi Actress Alia Bhatt To Resume Shoot For Sanjay Leela Bhansali Directorial In October?

According to a report in Mid-Day, Alia Bhatt is back on the sets and the shooting has resumed from it was left off in March. The shooting is taking place at Mumbai’s Film City where a 50-member team that also includes the cast will be a part of the schedule. Talking about the shoot, a source revealed to the tabloid, “To maintain continuity, Sanjay sir picked up the shoot exactly from where he had left it. Since October 1, Alia and the team have been reporting to the set by 7pm, and the stint goes on till the wee hours of the morning. Although a part of the grand set had been pulled down ahead of the monsoons, the portion resembling Kamathipura had been left untouched. So, the director has been able to shoot without any hiccup.” Gangubai Kathiawadi: Alia Bhatt’s Film Set to Get Demolished Due to Lockdown?

Gangubai Kathiawadi, written by Utkarshini Vashishtha, is based on a chapter of Hussain Zaidi’s book Mafia Queens of Mumbai that revolves around the madam of a brothel in Kamathipura. The film was scheduled to be released in September but had to be postponed owing to the pandemic. The makers are yet to announce the new release date of the film.

(The above story first appeared on LatestLY on Oct 06, 2020 08:56 AM IST. For more news and updates on politics, world, sports, entertainment and lifestyle, log on to our website latestly.com).