The video promotes washing hands, maintaining social distance and wearing masks. It left the fans impressed but they all demanded for the film's sequel. 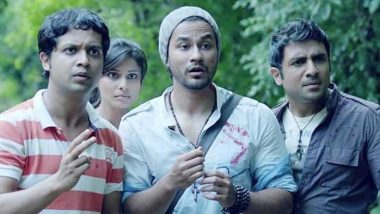 A Still from Go Goa Gone

Mumbai, May 10: Actors like Kunal Khemu, Vir Das and Anand Tiwari celebrated seven years of their hit film "Go Goa Gone" with a video carrying the message of social distancing in times of the coronavirus pandemic.

"7 years of Go Goa Gone!! On this Mother's Day as go goa gone completes 7 years. The boys and girl wanted to thank Mother Nature for providing us with so many amazing things including. #babajikibooti

P.s : it's home made.. even the video," Kunal captioned the over two-minute video that he posted on social media on Sunday.

The video promotes washing hands, maintaining social distance and wearing masks. It left the fans impressed but they all demanded for the film's sequel.

7 years before the current pandemic, zombies had attacked Goa! That was fun. This sucks.

In January this year, Kunal had said the sequel to "Go Goa Gone" had been going through logistical issues and hence the project couldn't take off over the past few years.

Asked when shooting for the film would possibly begin, Kunal had replied: "It's my question, too, because I have also read the announcement. Other than that, I don't have any knowledge. They (makers of the film) announced 'Go Goa Gone 2' twice in the last three years. There are logistical issues. Till the time we don't start shooting for the film, I will not believe it, because in the past two years I have been excited about that film on different levels and it's very close to my heart."

(The above story first appeared on LatestLY on May 10, 2020 11:19 PM IST. For more news and updates on politics, world, sports, entertainment and lifestyle, log on to our website latestly.com).