Hema Malini Birthday Special: Did You Know She Debuted As A Director With A Shah Rukh Khan Film? 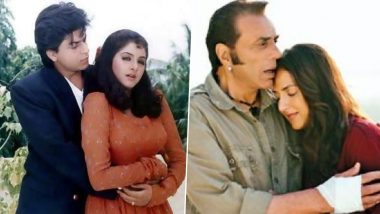 Hema Malini celebrates her birthday today. She ruled the film industry in the 70s and the 80s. Malini was also one of the highest-paid actresses of those times. Not many would call her an incredible actress, but she has a tremendous screen presence which is evident even today. Her laughs with a crinkle and that sweet face have left many in love with her. But that's not the only identity she has. The veteran actress has also directed quite a few notable contents that deserve a mention here. Esha Deol Quashes Reports About Hema Malini Testing Positive For COVID-19, Says ‘She Is Fit and Fine’ (Read Tweet)

We all are aware that Hema Malini is the first person to sign Shah Rukh Khan for a film opposite Divya Bharti, Dil Aashna Hai. Apparently, she wanted Aamir Khan or Akshay Kumar but dates were an issue and after SRK's look test, she could see a lot of merit in him. She also did some really great work on TV. On her birthday today, let us tell you a bit about director Hema Malini.

Hema Malini produced, wrote, directed, and acted in this limited episode series with Bharatnatyam at the core. It's a story of a dancer's struggle and hardships. There are many fans of this show even today.

It was a humungous cast, no not because of Shah Rukh Khan Khan or Divya Bharti. It had Dimple Kapadia, Amrita Singh, Sonu Walia, Mithun Chakraborty, Jeetendra and Kabir Bedi. Although the film crashed, it became quite popular. Making a movie all about women was a big deal in the 90s where heroes were everything and that too in the mainstream cinema. The attempt itself should be applauded.

In the context of this show, a disfigured man comes across a beautiful woman who claims to love him. The mystery around her forms the movie. It was beautifully mounted and Madhu, one who debuted alongside Ajay Devgn in Phool Aur Kaante, looked ravishing as Mohini here.

The show was one of a kind which celebrated the women of India. Amrapali was of the characters that this show took up. It was a fascinating and amazing story of Amrapali which broke many myths.

Dil Aashna Hai got a sprightly spin when Malini decided to do a remake of her own movie. Although it couldn't match up to the original, she did give a good contemporary touch to it.

(The above story first appeared on LatestLY on Oct 16, 2020 08:20 AM IST. For more news and updates on politics, world, sports, entertainment and lifestyle, log on to our website latestly.com).