Hrithik Roshan To Make Digital Debut With the Remake of Tom Hiddleston's The Night Manager?

The Greek God of B-town, Hrithik Roshan might soon make his digital debut through remake of Tom Hiddleston's The Night Manager, if reports are to be believed. 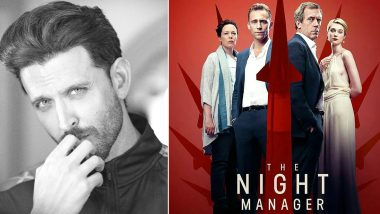 Bollywood actors are no more restricting themselves to the big screen opportunities. As the OTT platforms clearly hold a bright future, the actors are delving into digital space. Many top actors made their digital debut in recent years that turned out to be successful. Now it is time that fans get to watch Hrithik Roshan in that space too. The Greek God of B-town might soon make his digital debut through remake of Tom Hiddleston's The Night Manager, if reports are to be believed. Krrish 4: Rakesh Roshan Denies Reports That Hrithik Roshan Will Play Four Roles in the Upcoming Sequel.

A source close to the development, told mid-day, "The top brass at the streaming giant feel Hrithik Roshan, with his sex appeal and acting skills, will be the perfect choice to step into Hiddleston's shoes as the luxury hotel manager who is hired to infiltrate the inner circle of an arms dealer. They have also suggested a web adaptation of The Citadel, which revolves around medical ethics."

Amid Ben Cross' The Citadel's remake and The Night Manager, the handsome star has apparently liked the latter role more and has given a nod. The source also added that Disha Patani and Tabu are approached by the makers to step into the shoes of Elizabeth Debicki and Olivia Colman respectively. That looks like a promising cast now! This remake might hit Disney+ Hotstar says report. Stay tuned for more updates on this topic.

(The above story first appeared on LatestLY on Aug 05, 2020 04:30 PM IST. For more news and updates on politics, world, sports, entertainment and lifestyle, log on to our website latestly.com).