Hum Chaar is directed by Abhishek Dixit and is scheduled to release on February 15. 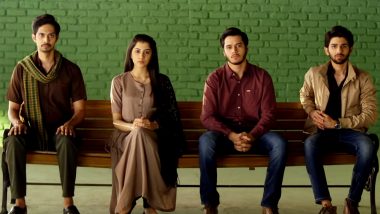 Rajshri Films have always been known for making movies that give importance to families. Hum Aapke Hai Kaun, Hum Saath Saath Hai, Vivah and even their last film, Prem Ratan Dhan Payo. But we also have to remember that they have also given one of the best films about friendship in the 1964 film Dosti. So it shouldn't really come off as a surprise when the trailer of their new film, that is about friendship, Hum Chaar, begins with a song from this film! Hum Chaar: Rajshri Productions Continues its 71 Year Old Legacy, Announces a Brand New film on Friendship.

However, Hum Chaar is not about the unbreakable bond of friendship that we associate with the likes of Jai and Veeru from Sholay or Ramu and Mohan in Dosti. It is the new-age tale of friendship where pals do not remain pals thanks to distance, busy schedules or even ego hassles. A combination of these factors is what affects the friendship between the four leads in Hum Chaar, played by newcomers Prit Kamani (who looks a lot like Kartik Aaryan), Simran Sharma, Anshuman Malhotra and Tushar Pandey. Prit Kamani, Anshuman Malhotra and Tushar Pandey - Who Will Replace Salman Khan as Prem in Rajshri’s Next?

Through a mockumentary kind of interview, each of them separately talks about how they developed a bond during college and how they are not friends anymore now. They put blame on the other, while the sole girl in the group feels that the fault often comes to her head. However, when the interviewer points out that they still keep tabs on each other, despite not being friends, they have no clue how to answer this.

There is no doubt that some of the themes shown in the teaser will resonate among many of the viewers, who have lost touch with some of their best pals. Hum Chaar is directed by Abhishek Dixit and is scheduled to release on February 15. In the process, it will clash with Ranveer Singh and Alia Bhatt's Gully Boy.

(The above story first appeared on LatestLY on Jan 15, 2019 04:08 PM IST. For more news and updates on politics, world, sports, entertainment and lifestyle, log on to our website latestly.com).