Into The Wild With Bear Grylls: The Teaser of Akshay Kumar's Thrilling Episode Out Now, Will Premiere on September 11 on Discovery+

Akshay Kumar took to his Twitter account to share the first teaser and premiere date of his upcoming episode with Bear Grylls. Khiladi Kumar's die-hard fans will be able to catch his wild escapades on September 11 on Discovery+ and later on Discovery channel on September 14. 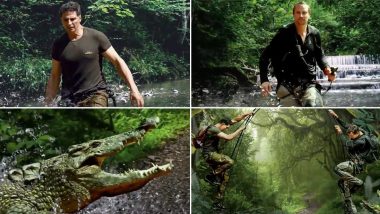 Bear Grylls isn't done with Indian celebs yet. After shooting episodes with Prime Minister Narendra Modi and Rajinikanth, Grylls is back and this time he has Akshay Kumar's company. While the news of Akshay being his next guest was out in January 2020, it's premiere date was kept under wraps until today. The Bell Bottom actor took to his Twitter account to share the first teaser and premiere date of his upcoming episode. Khiladi Kumar's die-hard fans will be able to catch his thrilling escapades on September 11 on Discovery+ and later on Discovery channel on September 14. Rajinikanth in 'Man Vs Wild' Funny Memes Starts Trending Online as Thalaiva Fans Say The Animals Will Have to 'Mind It!'

Akshay Kumar was clicked at Mysore airport in January when the actor was on his way to Bandipur National forest to shoot with Bear Grylls. For the ones who don't know, Into The Wild With Bear Grylls sees the host taking up a challenge to survive in the wild but he's never alone. He's always accompanied by different famous personalities and celebrities who embark on a journey like never before. His episodes with PM Narendra Modi and Rajinikanth received some great TRP ratings and we bet his next with Kumar will rake in similar numbers.

You thinking I mad… but mad only going into the wild. #IntoTheWildWithBearGrylls@BearGrylls @DiscoveryPlusIn @DiscoveryIN pic.twitter.com/q5LXat2xdL

Akshay is also the first Bollywood star to feature in an episode with Bear Grylls. Besides the name mentioned above, there were also reports of the Indian skipper, Virat Kohli being a part of his guest list. Hopefully, the makers will unveil his promo in the coming months.

(The above story first appeared on LatestLY on Aug 21, 2020 11:44 AM IST. For more news and updates on politics, world, sports, entertainment and lifestyle, log on to our website latestly.com).