Katrina Kaif sister Isabelle is all set for the release of her Hindi debut film Time To Dance. She says she got a few very important tips from her superstar sister, to understand the big world of Bollywood. 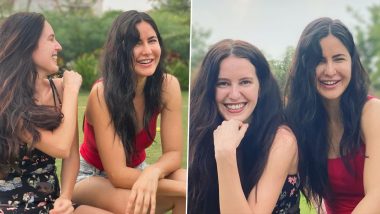 Katrina Kaif sister Isabelle is all set for the release of her Hindi debut film Time To Dance. She says she got a few very important tips from her superstar sister, to understand the big world of Bollywood. "She (Katrina) watched the trailer and the songs that have come out so far, and after watching them she sent me a long message. I am in Agra now, shooting. So we are away from each other. She said to me, 'in films, it is actually going to be more hard work than what you are thinking probably, so focus on the work first and do not get distracted by anything else'," Isabelle recalls. Aaye Haaye Song From Time to Dance: Sooraj Pancholi, Isabelle Kaif Groove to Vishal Mishra’s Groovy Beats (Watch Video).

"My sister also said that you cannot get the liking of 100 per cent people but that should not demotivate you. It is okay, no one gets that, but do not take criticism personally or in your heart so much that it hurts you. She watched the song when it came out and told me that I am looking nice while dancing! I am happy!" she adds. In "Time To Dance", Isabelle Kaif portrays a dancer who participates in a competition to save her dance academy. However, during the rehearsals, she has a leg injury and that changes everything in her life and sets new challenges. Time To Dance Trailer Review: Isabelle Kaif and Sooraj Pancholi’s Dance Film Looks Blah! (Watch Video).

Her Bollywood debut will happen in theatres, what with theatres opening post pandemic, so what's her frame of mind? "I thought I would be nervous because it is my debut film, but surprisingly I am excited to know what the audience feels.

So, I am enjoying the moment, since the trailer released and the reactions started pouring in. This is my first film, so I am rather eager to know what the audience thinks. Also, since I am shooting for my next film here in Agra, my mind is invested in that, too. So, there is no anxiety for the release, rather excitement," she replies Directed by Stanley D'Costa, the film also features Sooraj Pancholi, Waluscha De Sousa, Saqib Saleem, and Rajpal Yadav.

(The above story first appeared on LatestLY on Mar 12, 2021 12:27 PM IST. For more news and updates on politics, world, sports, entertainment and lifestyle, log on to our website latestly.com).