YRF confirmed that the period film Prithviraj, starring Akshay Kumar in the lead, is all set to be released this Diwali, which is on November 5. It is the same date that even Shahid Kapoor’s sports drama Jersey is also slated to be released. 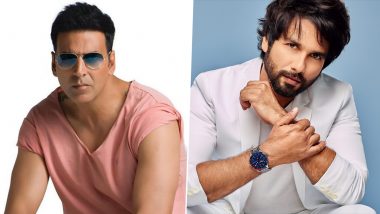 Yash Raj Films, on February 17, announced about the line-up of movies under its banner that are ready to be released in theatres. It included Arjun Kapoor – Parineeti Chopra’s Sandeep Aur Pinky Faraar, Rani Mukerji – Saif Ali Khan’s Bunty Aur Babli 2, Ranbir Kapoor’s Shamshera, Ranveer Singh’s Jayeshbhai Jordaar and Akshay Kumar’s Prithviraj. Aditya Chopra’s production house expressed its ‘strong intent to bring audiences back to experience films on the big screen’. While fans were eagerly waiting to hear about the release date of Shah Rukh Khan’s Pathan, one could not also miss the biggest clash that is going to happen between Akshay Kumar and Shahid Kapoor at the box office this Diwali. Jersey To Release In Diwali 2021! Shahid Kapoor’s Film To Hit The Theatres On November 5.

YRF confirmed that the period film Prithviraj, starring Akshay Kumar, Manushi Chillar (acting debut), Sonu Sood and Sanjay Dutt, is all set to be released this Diwali, which is on November 5. It is the same date that even Shahid Kapoor’s sports-drama Jersey is also slated to be released. It was in mid-January when the makers of Jersey had confirmed about the film’s release. Akshay and Shahid both have a huge fan base not just in the country, but across the globe. We wonder who will rule at the box office during Diwali! From Ranveer Singh’s Jayeshbhai Jordaar to Akshay Kumar's Prithviraj, YRF Announces Release Dates of 5 Films in 2021.

Prithviraj directed by directed by Chandraprakash Dwivedi is a biopic on 11th century ruler Prithiviraj Chauhan. Jersey is a remake of the Telugu film of the same name that will be helmed by Gowtam Tinnanuri, who had also directed the original. This Diwali is indeed going to be a dhamakedaar one for movie buffs!

(The above story first appeared on LatestLY on Feb 18, 2021 08:26 AM IST. For more news and updates on politics, world, sports, entertainment and lifestyle, log on to our website latestly.com).