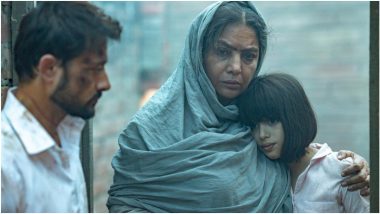 Netflix has released the trailer for the upcoming Indian original horror film, Kaali Khuhi, and it looks impressive from the word go. The streamer has invested in original Indian horror titles like Ghost Stories, Betaal, Ghoul in the past. Kaali Khuhi is about the ghosts of the victims of female infanticide, it seems. The eerie movie stars Shabana Azmi, Sanjeeda Sheikh, Satydeep Mishra, Leela Samson and Riva Arora, who plays the 10-year-old protagonist Shivangi. The internet has loved the trailer and many are talking about it on social media. Kaali Khuhi Trailer: Sanjeeda Sheikh And Shabana Azmi's Horror Film Will Make You Squirmish (Watch Video).

Film's Director Terrie Samundra has said, "'Kaali Khuhi' explores the dark history of a family haunted by its gruesome past and entangled in a web of unnatural occurrences. As 10-year-old Shivangi witnesses her entire family fall deeper into the secrets of the black well, she's put to the ultimate test. Interweaving elements of drama, suspense and grounded horror, the film is an exciting watch for discerning audiences."

Of course, the premise will intrigue netizen. No wonder appreciation tweets have been flooding Twitter.

One of The Best Trailers

So much excitement for this one! All the best @ramonchibb n @ankupande. One of the best trailers this year :)) #KaaliKhuhi https://t.co/BnQhzfdo9s

The trailer is so good and engaging Anku. Congratulations to the entire team. Looking forward to #KaaliKhuhi 💥

Talking about the film, Shabana Azmi has said, "'Kaali Khuhi' is a story about fear, love, hope and perseverance, and how, when the odds are stacked against us, we find strength from unlikely places. It's been quite the journey and I'm looking forward to people watching it,"

Kaali Khuhi drops on the internet on October 30. Say tuned to LatestLY for more updates.,

(The above story first appeared on LatestLY on Oct 16, 2020 09:50 PM IST. For more news and updates on politics, world, sports, entertainment and lifestyle, log on to our website latestly.com).