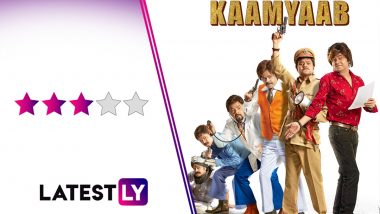 Kaamyaab Movie Review: In Zoya Akhtar's debut film, Luck By Chance, there is a very fascinating scene in the first act. An acting institute invites the late MacMahon, a popular character artiste, to award the certificates, and he is asked to deliver a speech. Before he could even utter a word. one of the students asks the actor to deliver the one line he is known for. He acquiesces and says the dialogue that his entire career is defined by - 'Pure Pachaas Hazaar' from Sholay. In Hardik Mehta's Kaamyaab, Sudheer (Sanjay Mishra) is also known for his one line, even though he had acted in 499 films and has been a respected character artiste. Sanjay Mishra on Shah Rukh Khan’s Appearance in Kaamyaab: ‘SRK Isn’t Acting but Backing the Film as a Presenter’.

When we meet him first (after a cheeky montage of the roles that he did in cinema), Sudheer is being interviewed by a local channel from Gharwal. He looks beleaguered, his body language is drooping and he doesn't even look at the camera. It is clear that he is disappointed with how his career has turned, and hasn't done any movies in recent times. And he even puts down the one line that people remember him by 'Just enjoying life, aur option kya hai?'

When the interviewer reminds him that he has done 499 films in his career, backed by 'IMDB', Sudheer's attitude changes. His face is lit. He suddenly is more interested in the interview and faces the camera with more poise. Even though like his acting career, the interview goes nowhere, Sudheer finds a new spirit. He rediscovers his old dressing style and wig, and encouraged by his friend, he is determined to make his 500th film appearance.

Sudheer seeks the help of an old acquaintance, an oily casting agent Gulati (Deepak Dobriyal) to get him a big movie. His daughter Bhavna (Sarika Singh) isn't very enthu about the idea, remembering his horribly his last acting gig went (a nod to a very controversial episode involving Dharmendra and the king of sleazy films, Kanti Shah). Gulati manages to get him a big opportunity in the potential blockbuster. But can Sudheer's old-style methods work in this frenzied, polished era of cinema? Or in Gulati's own words, 'purane chawal se risotto pakane chale'!

If Lucky By Chance was a tribute to the strugglers wanting to make it big in Bollywood, then Sudheer in Kamyaab represents the many character artistes that has appeared in many films. We don't even know many of their names, and some of them have faded into oblivion or ended in tragedy. Like the actor Mahesh Anand, who recently committed suicide. Kaamyaab is a heartfelt ode to such unsung stars, who may fade away when the 'hero' arrives but their contribution will never be forgotten. Even if that's just one line. Just watch out for the end credit scenes, where Kaamyaab thanks a few such actors who aren't with us anymore.

Watch the Trailer of Kaamyaab below:

As a movie, Kaamyaab works best when it highlights the plight of these character artistes. Through Sudheer's attempts to make his 500th film big in the first half, we get some funny, poignant self-referential nods and winks to the workings of the industry. It was lovely to see actors like Birbal, the late Viju Khote (in his final screen appearance), Lilliput, Guddi Maruti et al appear as themselves in the film. Through their appearances, we remind how cinema has changed, both for them and the viewers. As Sudheer puts it in the most apt manner, even an autograph sounds odd in the era of selfies.

At the same time, it also highlights how the industry metes out secondary, or even tertiary treatment, to them.  Like how a character artiste Avtar Gill (playing himself, in one of his most memorable roles in recent times) is conned from being paid by the producers, because they managed to get his voice dubbed by someone else. Kaamyaab Trailer: Sanjay Mishra and Deepak Dobriyal Narrate the Exceptional Journey of a Character Artist (Watch Video).

While the scene is played in a light-hearted flair, we can't help but think if the producers can pull such a stunt on a star. The movie even refers to darker episodes that these actors may get into, from suffering from depression and loneliness, or getting into shady projects in need of work.

There are also some quirky meta nods in the narrative. The protagonist is possibly named after two real-life Sudhirs of the industry. The film that Sudheer gets to act in is called 'Rana Jung Bahadur', which is also the name of another popular character artiste. The director (Nasirr Khan) is called Chandra Barot, a nod to the director of Amitabh Bachchan's Don. There are plenty such Easter Eggs to catch here.

The dialogues (Radhika Anand, Hardik Mehta) add enough zing to the narrative. They either deliver sharp potshots on the industry (Anupam Kher's Twitter mania and the dig on nationalism fervour got the maximum applause in my screening). Or offers some nice insights to cinema as a medium.

Kaamyaab, however, splutters somewhat in the post-interval portions, as the film turns more serious. It isn't the serious turn that's the issue here. It's the scheme of things that follow, that gets Kaamyaab back in some very familiar territory. Especially the portions that get into Sudheer's troubled psyche, after a very humiliating episode, feels very heavy-handed. Even the pace dips in these portions. The track between Sudheer and his young neighbour (Isha Talwar) feels shoehorned in the film for parallel effect (the girl works in YouTube series and couldn't make it big). That said, there is a very interesting moment between these two characters, though, when both, drunk and down in their ebbs, poke holes at Mumbai being the 'city of dreams', and plagiarism in music.

Kaamyaab, however, does return to good form in the climax that feels like a contained ode to the haunting finale of Mera Naam Joker, with a bravura performance from Mishra.

It is a stupendous show from Sanjay Mishra as the protagonist who finds a reason to cheer in the dying twilight of his career. He is a rad act in the scenes where he has to recreate the tropes of the bygone era of cinema, and is wonderfully understated as the man seeking a glory that he never owned and as a father, who has been a let down for his daughter. Sudheer's wig and his flowery dressing style may stick out as a sore thumb in this Manish Malhotra-obsessed time, but Mishra refrains from making the character a caricature.

I did wish that Deepak Dobriyal had more to do in the second half, so good he was as the opportunistic (but not bad) casting agent. Sarika Singh is fine as Sudheer's daughter, who wants him to be her father rather than someone stuck being a side-actor. Isha Talwar is up to the mark as the young struggler.

- Some Good Writing and Dialogues

- Second Half is SLow-Paced and Occasionally, Heavy-Handed

- Familiar Story-Telling in These Portions

Kaamyaab is a pleasing, often sparkling tribute to those actors who may never gotten the top billing, but have enhanced our experience of cinema with their contributions. There are moments, especially in the second half, where the film falters and struggles, like its protagonist. But Sanjay Mishra's strong lead act helps the film sail past the struggling moments to a very rousing finale.

(The above story first appeared on LatestLY on Mar 02, 2020 08:47 PM IST. For more news and updates on politics, world, sports, entertainment and lifestyle, log on to our website latestly.com).