We are waiting for Yash to give Karan Johar to give him his second mini meltdown! 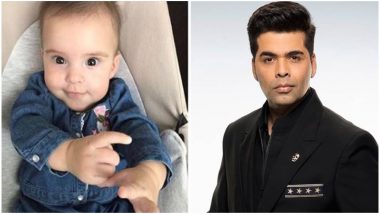 Ask any parents  about what has been one of the most pleasing experiences of having a kid, and many of them would have one answer - when the little tot utter the first word and that happens to be mom or dad. Now Karan Johar has gone through the same experience and he is experiencing fits of happiness right now. All thanks to his daughter Roohi!

As you are aware, the famous director-producer has twins, Yash and Roohi, through surrogacy. They are the two apples of his eye, and the reason why he has taken some time out of his busy schedule is to make himself as a loving parent to his kids. And he has got his reward.

Karan Johar has revealed on Twitter that he is going through a mini meltdown and it is all because his daughter Roohi called him 'papa'!

She said “papa”! It’s time for my mini meltdown!

Congratulations Karan Johar for this! It remind us of the time when you wrote an open letter to your kids, where in a para, you had described the feeling of holding Roohi for the first time. You had written, “When I held them for the first time, I don’t think I can describe the feeling. I cannot explain what I felt. I just sat in the chair and held my daughter first, as she is a little more vulnerable medically. I didn’t even realise there were tears rolling down my face. That feeling cannot be replaced by any other emotion.”

We are waiting for Yash to give Karan Johar to give him his second mini meltdown!

(The above story first appeared on LatestLY on Mar 31, 2018 08:25 PM IST. For more news and updates on politics, world, sports, entertainment and lifestyle, log on to our website latestly.com).