Kareena Kapoor Khan: I was Actually in School when I Watched Saif's Yeh Dillagi (Watch Video) 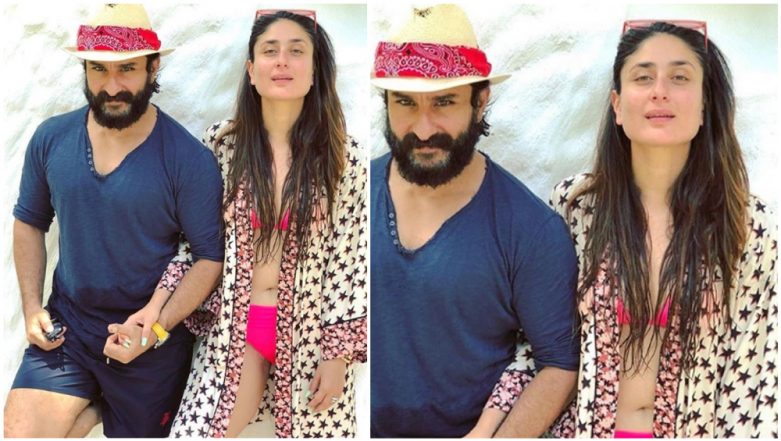 Kareena Kapoor Khan and Saif Ali Khan's age difference was enough fodder for meme-makers when the duo decided to get married. Even Ajay Devgn took a subtle dig at them in his last release, De De Pyaar De when he mentioned them as one of the most successful couples who have ignored the age difference in their relationship. And if the viral picture of Kareena attending Saif and Amrita's marriage as a school girl wasn't enough to tickle your bones, her recent revelation should satiate you enough. De De Pyaar De: Ajay Devgn's Comment on the Age-Gap Between Saif Ali Khan and Kareena Kapoor Khan Gets a Thumbs Up from the Latter.

Kareena, who's one of the three judges for Dance India Dance's new season was seen grooving on stage to Saif's iconic song, Ole Ole from Ye Dillagi. The actress was asked to join the contestants on stage and shake a leg to her hubby's popular song. It was only after her brief performance that Bebo unhesitatingly said she performed better than Saif and she was actually in school when she watched Yeh Dillagi. Saif Ali Khan Is Nervous about Wife Kareena Kapoor’s TV Debut with Dance India Dance.

The standard of dance will surely increase every week! Tune in to Zee TV on Saturday and Sunday at 8 pm to watch Dance India Dance. #DanceKaJungistaan #DanceIndiaDance #BattleOfTheChampions

For the ones who don't know, Saif Ali Khan's Yeh Dillagi released in 1994 and it also starred Kajol and Akshay Kumar in the lead roles. The actor was 24 years old during the film's release while Kareena was in school. Age is clearly just a number for this duo and we can't deny the fact that they look so gorgeous together. However, we do wish to know Saif's reaction to Bebo's recent statement and if he'd have any witty take on it.