Kareena Kapoor Khan Quizzes Sonam Kapoor On Homosexuality and Same-Sex Love In This Video: Sonam's Response Is Worth A Listen! 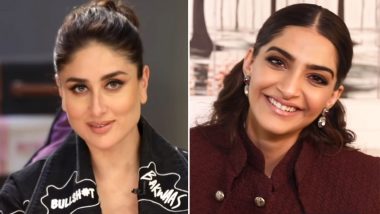 Ek Ladki Ko Dekha Toh Aisa Laga song as indeed the title has surely acquired new connotation with the same-sex love story portrayed  in the film starring Sonam Kapoor in the lead role who is playing a lesbian character.  While the film has garnered mix reviews with critics appreciating the fact that a daring subject portrayed delicately on celluloid without losing the emotions involved in the plot line. The movie has generated some much-needed discussions and debate.

In this conversation, Kareena Kapoor Khan, who wears the hat of a Radio Jockeym poses some really interesting questions to Sonam, that majorly revolve around homosexuality and the phobia this preference evokes. Sonam is seen here facing some really  interesting queries. From the deep seated prejudices to how love should be set free, everything is discussed in this holds-no-barred conversation. Take a look!  Ek Ladki Ko Dekha Toh Aisa Laga Box Office Collection Day 3: Sonam Kapoor's Unusual Love Story Is Struggling to Stay Afloat, Earns Rs 13.53 Crore

Like everyone else, our in house critic Sreeju Sudhakaran maintains.  "I have to applaud the makers of Ek Ladki Ko Dekha Toh Aisa Laga for bringing same-sex romance out of the closet to the general audiences. For till now, we have only seen homosexual characters getting caricatured in mainstream cinema, while lead actors never dared to play such roles. We all remember the brouhaha over Deepa Mehta's Fire. Then we have Karan Razdan's Girlfriend, when the lead character, who is obsessed with her girlfriend, is shown as a psychopath."Ek Ladki Ko Dekha toh Aisa Laga Celeb Movie Review: Akshay Kumar, Farah Khan and Karan Johar Give This Love Story a Thumbs Up

It is clear that Ek Ladki Ko Dekha Toh Aisa Laga will generate debates and discussions that we as a progressive society must encourage. Fans, you can give us your views on the same in the comment section below.

(The above story first appeared on LatestLY on Feb 04, 2019 05:40 PM IST. For more news and updates on politics, world, sports, entertainment and lifestyle, log on to our website latestly.com).