Kartik Aaryan: I Want to Marry a Girl Like Deepika Padukone Who Shows Off Her Husband Proudly 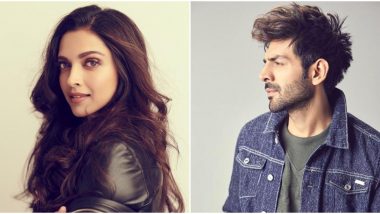 While girls can't stop gushing about Kartik Aaryan, the actor is in fact besotted by Deepika Padukone and wants to marry someone like her. No, we aren't making up stuff or reporting any hearsay stories but the Dostana 2 actor has confessed that if given a choice or asked what kind of girl he wants to get married to, he'd pick someone like Ms Padukone, now Mrs Bhavnani. But it wasn't the fanboy in him talking but a certain quality about her that prompted him to take her name. Deepika Padukone Wants Kartik Aaryan To Shave His Beard And We Say It Is About Time (See Pic).

Kartik in his recent interaction with Bollywood Hungama was asked a fan question about the kind of girl he'd like to marry. The actor without hesitating named someone like Deepika Padukone as his choice simply 'cos he loves the way she shows off her husband proudly. Well, we do know how DP likes to keep talking about her man and the same quality would make any man fall for her. We don't blame Mr Aaryan here. Besides being so gorgeous and a talented actress, Deepika is a doting wife and Ranveer is really one lucky man. Kartik Aaryan Lauds Deepika Padukone's JNU Visit Says, 'I Respect What Deepika Did Yesterday and I Hope a Lot of People Would Stand Up' (Watch Video).

Check Out his Conversation

Why @TheAaryanKartik wants to marry a girl like @deepikapadukone?#TalkingFilms #BollywoodHungama

Kartik was also asked if he'd like to work with Katrina Kaif someday since they look amazing together. While one may expect him to say 'yes,  he simply said, "I actually look even better with DP also. So, kya lagta hai? Hum logon ki jodi bhi achi lagegi kya?" He further requested the fan to start manifesting in the universe that he should get a chance to work with Deepika very soon. Guess, his obsession for Kareena Kapoor Khan has taken a back seat for now and Deepika has taken her place. And do we see them working together in future? Hell, yea.

(The above story first appeared on LatestLY on Jun 03, 2020 08:25 PM IST. For more news and updates on politics, world, sports, entertainment and lifestyle, log on to our website latestly.com).