Kedarnath underplays the real-life tragedy a bit too much to focus more on a very predictable, wafer-thin love story which is the movie's biggest undoing. 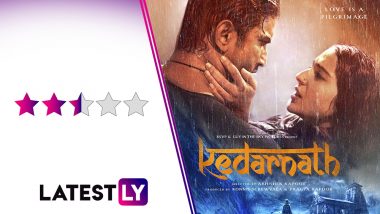 2013 Uttarakhand floods were considered one of the worst water-related disasters India has seen. Director Abhishek Kapoor has based his new film Kedarnath against this tragedy. However, Kedarnath the movie has less to do with how our country coped with this disaster, and more to do with a love story created purely for the audience to sit through the film. The movie is getting talked about for being Sara Ali Khan's debut, and if you are in to see how good she is, then you might not be disappointed. But if you wish that Kedarnath offers more pathos to the real-life tragedy, there is a lot to say on that. Kedarnath Movie Row: Uttarakhand Government Sets Up Panel to Examine Objections About Sushant Singh Rajput, Sara Ali Khan Starrer.

Kedarnath begins in May 2013, a month before the floods happened. We are introduced to Mansoor Khan (Sushant Singh Rajput), who works as a pithu, a local guide who ferries pilgrims to the Kedarnath temple. Mandakini aka Mukku (Sara Ali Khan), the spunky younger daughter of a Hindu priest (Nitish Bharadwaj) falls for this good-hearted lad, though she is already engaged to a greedy family friend. Soon, a tender romance develops between the two, even though Mansoor is cautious of the future of their relationship.

His fears come true when her family comes to know of their relationship and all hell breaks loose on them, literally and figuratively.

If the above plotline reminds you of the movie, Titanic, then I must add here that the semblance is not so coincidental. Watching the movie makes you feel like the writers (Abhishek Kapoor, Kanika Dhillon) saw the James Cameron blockbuster and spun a screenplay around it with a Hindu-Muslim twist. You can really draw a lot of parallels between both the films, from the onset of the star-crossed romance that leads into a real-life tragedy. They have even thrown in the 'steamy car' and 'the door holds one' moments, though not exactly in that direct sense. Sara Ali Khan’s Style File for Kedarnath Promotions Proves Simplicity Is the Ultimate Sophistication - View Pics

Though I am a sucker for love stories, my real interest in watching Kedarnath in how it depicts the floods. Though it comes towards the fag end of the movie, these scenes actually arrest your attention with some really decent VFX, and a couple of heart-stopping moments. There are some really spectacular shots like Mansoor rushing back to the town to save Mukku as the camera pans wide to show the impending doom. Or how the rushing water forms a Shesh-Nag like appearance over a temple.

However, by the end, if you really don't feel the impact of these scenes, is all because what happened before.

Or to be specific, the fictional love story of two fictional characters whose script can be easily guessed by anyone who watched a couple of masala movies.

The romance in Kedarnath has its moments, thanks to the chemistry between the leads. There is a certain charm in this fresh pairing of Sara and Sushant, set against quaint, lovely locales of the snow-laden Uttarakhand. While we have seen this aspect in some of our recent movies, it is cool to see the girl take charge of the love story for a change. Interestingly, Abhishek Kapoor even makes them bond first through cricket. The sport was also a motif used earlier as a friendship bonding between the leads in his third film, Kai Po Che, which incidentally was Sushant's big screen debut.

But I have to ask this, just how many movies will Bollywood cash on this rich-poor, Hindu-Muslim divide? Didn't we have a similar movie, Dhadak, that came out this year, starring two more star kids? Why even, Sara's mother, Amrita Singh had made her debut (Betaab) with a similar theme and that was in the early '80s!

Watch the trailer of Kedarnath here -

Inspirations aside, the problem with the love story is that the predictable yarn gets dragged for too long. By then though you had dealt with some very annoying characters like an emotionally blackmailing mother, a vain fiancee and a jealous sister. The movie focuses on the lead characters so much that their dynamics with the rest of their families are rushed over. Like I really have no clue why Mukku's father wants her to marry a guy, who rejected his elder daughter's engagement in desiring to marry the younger one.

Romance is cool and all, but the writers here had an opportunity to delve more into the background of the disaster. Here, the floods feel more like a conflict-ender for the romance, rather than serious observation of the human losses in one of this century's worst tragedies (the casualties of which is glossed over before the end-credits with real footage shown). There are a couple of scenes that discuss how the booming business in the area is weakening the valley. There are also moments where they strongly hint at the simmering communalism. However, such discussions are often treated as fillers in the cliched romance. Just like that random scene, where Sara's character takes off one hoarding among many from a wall and thinks her job is done here!

While Kedarnath disappoints with its premise, it stuns you visually. Full credit must go to the VFX team and the cinematography (Tushar Kanti Ray). I can't get over that opening sequence where the camera follows a family standing at the bottom of the hill, before it circles around to show the climb above to reach Kedarnath temple. The music by Amit Trivedi is really good, especially the opening devotional song, the addictive Namo Namo (beautifully picturised against some wonderful scenery). The background score by Hitesh Sonik is equally impressive.

Sushant Singh Rajput once again delivers in a physically exerting role. He is very convincing even when he is carrying people on his back or when he shows reluctance in displaying his affections. He will walk away with all your sympathies by the end.

Sara Ali Khan is confidence personified in her debut performance. She reminded me a lot of Amrita Singh with her dialogue delivery and spunky act. Both the leads share an adorable chemistry which is the only reason why you even root for their romance. The rest of the actors do not get much scope. This is the second flood-related film I have seen Nitish Bharadwaj in, after Mohenjo Daro. As you know, he famously played Lord Krishna in BR Chopra's Mahabharata, whose city, Dwaraka, got submerged in floods. So his casting an inspired choice or a weird coincidence?

- The performances of the leads

- Takes too much time to talk about the tragedy

As with a couple of movies I had seen in recent times, Kedarnath is visually stunning with some really good VFX and cinematography. Both Sushant and Sara are also charming in their roles. However, Kedarnath underplays the real-life tragedy a bit too much to focus more on a very predictable, wafer-thin love story which is the movie's biggest undoing.

(The above story first appeared on LatestLY on Dec 06, 2018 08:16 PM IST. For more news and updates on politics, world, sports, entertainment and lifestyle, log on to our website latestly.com).