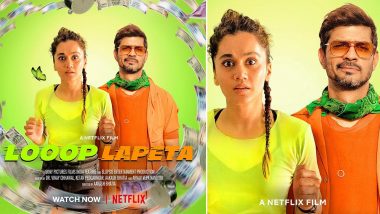 Looop Lapeta, starring Taapsee Pannu and Tahir Raj Bhasin, premiered on Netflix on February 4. The movie helmed by Aakash Bhatia is an adaptation of the 1998 released German movie titled Run Lola Run. Looop Lapeta has received mixed reviews from critics, and also within hours of its premiere, it even leaked on numerous torrent sites. Yes, this film has reportedly been leaked online and one could come across spoilers. It is apparently available to watch online in high-definition prints. Looop Lapeta Movie Review: Taapsee Pannu, Tahir Raj Bhasin's Netflix Film Is a Smart, Fun Remake of Run Lola Run (LatestLY Exclusive).

Despite issuing several warnings, these sites leak newly released films on their websites. Looop Lapeta full movie in HD has been leaked on the torrent sites such as Filmywap, Onlinemoviewatches, 123movies, 123movierulz, Filmyzilla, and other pirated versions of the series in HD (300MB free download in 1080p, 720p, HD online) are available for the audience to watch.

Apart from Looop Lapeta, there are several other films and web-series that have too become the victims of online piracy. It includes the recently released Bro Daddy, Hotel Transylvania Transformania, Minnal Murali, Atrangi Re among others that have also been leaked online and made available in HD prints.

(The above story first appeared on LatestLY on Feb 04, 2022 03:21 PM IST. For more news and updates on politics, world, sports, entertainment and lifestyle, log on to our website latestly.com).