Neeti Mohan: No One Can Deny Me Work Because I Am a Woman

Singer Neeti Mohan doesnt believe that women musicians get less work as compared to their male counterparts. The 41-year-old singer adds that no one has the right to reject work based on gender. 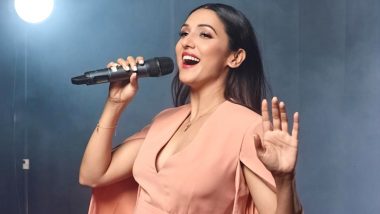 Singer Neeti Mohan doesnt believe that women musicians get less work as compared to their male counterparts. The 41-year-old singer adds that no one has the right to reject work based on gender. "I don't think that there is any sort of problem for women, be it film music or even non-film music. I mean, no one can deny me work just because I am a woman," she tells IANS. Neeti Mohan Announces Pregnancy With Hubby Nihaar Pandya on Their Second Wedding Anniversary, Flaunts Her Baby Bump (View Pics).

Neeti continues: "If I want to be a mother tomorrow and not work, that is also okay. If I want to work after becoming a mother, that is also okay. It is my choice. What I am trying to say is that, if you want to create your own space, you will find a way. No one else can decide the kind of work I want to do in future." Neeti Mohan Reveals How Do Singers and Music Team Work on a Song Remake.

Neeti's recent single, ‘Vilaayati sharab', which she sang alongside Darshan Raval has become an instant hit. She shares, she always knew that the song would be an instant success, because of its timing of release. "It's a proper dance number, and a fun number. It was released around Holi, and we always look to, you know, dance on such kinds of songs. It was a really nice song, which took us about two months, to record and shoot for," she signs off.

(The above story first appeared on LatestLY on Mar 26, 2021 10:31 PM IST. For more news and updates on politics, world, sports, entertainment and lifestyle, log on to our website latestly.com).