Priyanka Chopra Jonas and Nick Jonas, who welcomed their baby girl through surrogacy in January this year, have been tightlipped about their little one. 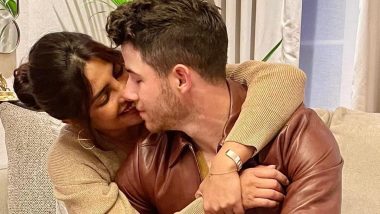 Priyanka Chopra Jonas and Nick Jonas, who welcomed their baby girl through surrogacy in January this year, have been tightlipped about their little one. However, media reports suggest that their daughter has been named, Malti Marie Chopra Jonas. 'TMZ' has seen the birth certificate of the couple's child and has reported the baby girl's name. 'TMZ' also revealed her time of delivery as January 15, 8 pm (Pacific Standard Time). Priyanka Chopra-Nick Jonas Name Their Baby Girl Malti Marie Chopra Jonas – Reports.

While Malti is an Indian name of Sanskrit origin, Marie is a Christian name. The newborn has both her parents' surnames and her names honour both her parents' heritage and culture. Priyanka and Nick, who tied the knot in 2018, had shared the news of the little one lighting up their hearts with her arrival, a few days after her birth, on their social media. All Coming Back: Priyanka Chopra, Sam Heughan’s First Look From Upcoming Film Unveiled! Makers Confirm Release Date.

Taking to her Instagram in January, Priyanka had shared a note where she wrote, "We are overjoyed to confirm that we have welcomed a baby via surrogate. We respectfully ask for privacy during this special time as we focus on our family. Thank you so much."

(The above story first appeared on LatestLY on Apr 21, 2022 03:19 PM IST. For more news and updates on politics, world, sports, entertainment and lifestyle, log on to our website latestly.com).